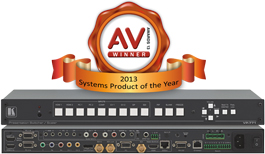 Kramer Electronics is pleased to introduce the VP−771, a high−quality presentation scaling switcher with an advanced feature set. The VP−771 accepts one of nine inputs, including one component video, one DisplayPort (DP), one 3G HD−SDI, two computer graphics video, two composite video and two HDMI inputs. It scales the video, embeds the audio, and outputs the video signal simultaneously to one HDMI, one computer graphics, one 3G HD−SDI and one DGKat Twisted Pair, and outputs the audio signal simultaneously to a digital audio output, an unbalanced stereo audio output and a 2x10−watt amplified balanced stereo speaker output.
The VP−771 supports multiple output resolutions, up to 2K and 1080p. The unit features Kramer’s K−Storm™ Scaling Technology for converting the incoming video signal to a scaled output resolution with a minimum of motion artifacts.            The VP−771 also incorporates Kramer’s FTB™ (Fade−Through−Black) switching technology that ensures ultra−fast, glitch−free switching.
The VP−771 is HDTV compatible, HDCP compliant and supports HDMI Deep Color. It features multi−standard operation and SDI channeling that selects one active signal and three bypassed signals from eight embedded stereo audio channels. It also features advanced input and output EDID Management and built−in ProcAmp, in which color, sharpness, contrast, brightness and gamma are set individually for each input. The unit also has a built−in time base corrector to stabilize any unstable video sources.
The VP−771 advanced feature set includes:
• Kramer’s K−IIT XL™ Picture−in−Picture Image Insertion technology − any video source can be inserted into or positioned next to a computer graphics video source or vice versa. Using this technology, both images can be sized in any manner and positioned anywhere on the screen.
• Luma Keying technology − an easy−to−use method of compositing two video sources into a single image. By setting up a “key” image or clip on a black background, this image can be merged onto the primary video.
• Emergency Alert Notification − an incredibly unique and extremely important feature that provides the ability to have a national or campus−wide notification immediately displayed when an emergency situation develops and when connected to a network. Notifications include flexible options such as the inclusion of an audio alert siren, and the choice of displaying via either a text crawler or a text window.
• Full Web page Management − an easy−to−use, built−in web interface, which is activated when connected through Ethernet, allowing simplified setup and switching, windows customization, scaling and deinterlacing functions, and more.
The VP−771 also includes a microphone input that supports mix and talk−over features, as well as 0−90msec adjustable delay to prevent feedback. The unit offers flexible control options through its front panel buttons with OSD (on−screen display), contact closure capability, IR remote interface and the included Control Application software, which is available for use via the unit’s Ethernet and RS−232 control ports.
The VP−771 is housed in a standard 19" 1U rack−mountable enclosure, with rack "ears" included.
The VP−771 is currently in stock and available from Kramer Electronics sales companies around the world.