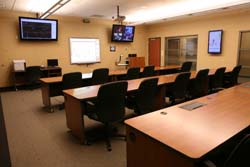 When the officials of Robertson County, Tennessee, planned a new 911 Emergency Command Center, their ideas called for a dual-purpose system:  information sharing and a communication base for emergency personnel.  Kramer Electronics and Sierra Video responded to the call.

Working with a local audio/video systems integrator, Robertson County officials designed their new emergency communications hub and training facility.  “We wanted to have a secure place for local government representatives and emergency management personnel to come and share information and make decisions for the community during a crisis,” said Elvis Wilson, Robertson County 911 System director. “The space also needed to be multi-purpose to support use on a regular day.”

Fingerprint recognition is required to enter the secured facility, and the walls throughout the building are 12-inch thick reinforced concrete.  Inside, two rooms house the advanced electronics equipment that enables efficient communication.  A dispatch center takes incoming calls and routes them to the appropriate emergency department – fire, police, or EMS.  An 18-seat training room boasts 16 computer connections routed to a Sierra Video SierraView™ multi-viewer and dual 60-inch flat panel screens.  Emergency representatives can connect their lap tops and share data on the left screen with others in the room to help expedite decisions in emergencies.  The second 60-inch flat panel provides the ability to monitor reports from up to four local and national television news outlets simultaneously on a multi-screen display.

Routing the video and audio behind the scenes are Kramer Electronics and Sierra Video products:   a Kramer 16x8 RGB HD router (VP-1608), a Kramer 6x6 DVI switcher (VS-66HDCP) and a Sierra Video 32x1 audio router (3201S).  A Kramer video switcher/scaler (VP-728) manages signals from the lectern and outputs information to a Smart device.  The entire system is controlled by an intuitive touch-screen interface.

Maynor Schott, fire chief in the County Seat of Springfield, was among the first to experience the new Emergency Command Center’s system.  “We used the training facility for a management seminar and we were amazed at what it can do,” he said.  “It took five years to get the funding and the plans in place, but the end result is simply amazing – that’s the only word to describe it.”

Emergency responders are being trained on the system so they are prepared to use it in case of emergency.  “The system is easy to use because of the controller,” said Wilson.  “The Kramer and Sierra Video products are great equipment at a great price.”

“Robertson County is among the first of Tennessee’s 95 counties to create a new 911 Emergency Command Center using their own financial bonds,” said Police Chief Mike Wilhoit.  The Center will serve the more than 62,000 county residents in emergency preparedness.

They can be confident that the Kramer Electronics and Sierra Video system will respond - - every time.