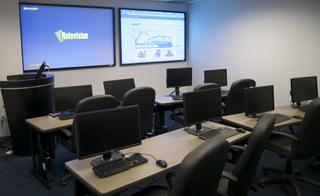 Simplicity was the key to AMEC’s new audio/video system in its Houston oil and gas office. According to Tom Austin of Industrial Audio/Video Inc. ( IAV ), the local integrator who installed the system, the executives at AMEC wanted to be able to outfit conference rooms and training rooms with easy−to−use equipment that allowed the use of both HDMI and VGA.  They wanted to get presentations up on the screen in two easy steps: 1.) hook up a laptop and 2.) a picture appears.

“They didn’t want a control system or a confusing bunch of products,” Austin said. “They wanted nothing at all on the table tops, so we designed a simple, easy−to−use system using Kramer products that were also easy to use.”

IAV designed sleek, no−nonsense systems for three different parts of the building:  the training room, the executive conference room and 23 smaller conference/training rooms.  Each room had a simple system that accessed the necessary digital technology with the push of a single button. There was no adjusting of projectors, resizing screens or poor quality images on the screens.

The primary training room, which seats about 30 people, inherited equipment from the executive conference room.  It included a Smart tablet for annotating, two ceiling−mounted projectors and Kramer Electronics VGA and HDMI cables within a custom podium.

Twenty−three smaller conference/training rooms were outfitted with identical systems that included either a Kramer Electronics VP−434 or VP−435 scaler along with Kramer VGA and HDMI cables. In each room, the Kramer scaler converts the selected video signal to a computer graphics or HDTV output resolution and outputs an HDMI signal, which is transmitted to the projector using CAT5 cabling. Because the cabling already existed in most of the rooms, it saved the time and money of re−wiring, Austin said. The VP−434 and VP−435 scalers, along with a CAT5 transmitter, switcher and all of the VGA, and HDMI cables, are housed under the conference room tables, so that there is no clutter on the tables themselves. Each system is controlled by a simple eight−button wall controller that has easy−to−understand functions.

Austin said the installation was done in stages and by blocks of conference rooms. AMEC used the rooms Monday through Thursday, so the IAV team could only work in them on Friday and Saturday. It took about eight months to complete the installation at the pace of about three or four rooms each week. “The training room was the most sophisticated, and the others were simple, even though each one was a little different,” Austin said. “We were very conscious of having no clutter on the table, and the under−table mounted units helped us achieve that.”

IAV made an auto−sensing system that addressed the technical and aesthetic needs of the end user.  Kramer Electronics scalers made it simple.


AMEC (LSE: AMEC) is a focused supplier of consultancy, engineering and project management services to its customers in the world''s oil and gas, minerals and metals, clean energy, environment and infrastructure markets.