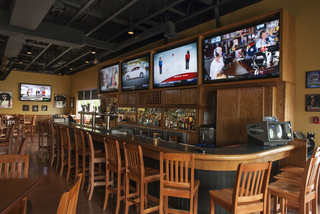 When Boston’s Pizza in Grand Junction, CO, planned a major restaurant remodel complete with multi−media, Kramer Electronics products were there.  In the two−day period the restaurant/sports bar closed for remodeling, dozens of video displays and routing equipment were installed, transforming the space into a sight and sound extravaganza.

Jim Fraser, commercial/professional systems designer for All Sound Designs, a local audio/video integrator, created the system for Boston’s Pizza.  “The goal was to achieve a full HDMI system that would send a variety of HD video to screens throughout the facility,” he said.  “We chose the Kramer routing and switching product because of its performance and reliability.  Also, the Kramer seven−year warranty is a huge bonus to my clients.”

Guests are surrounded by crystal clear video throughout the facility.  Four 80−ft. flat panel displays line the east wall of the bar and a variety of 80−, 60−, 55− and 42−inch displays are showcased on the remaining walls.  The dining room has three 47−inch and four 32−inch flat panel displays in each corner.  Every display can receive video from any of the signal sources by using the independent control system.  Serial control, IR control for the head end and monitors and IR distribution for the dining area displays allow the universal remote control system to reach the entire complex.

“The Kramer product is easy to use and control – each piece of equipment talks to the others, making it seamless and easy to operate,” Fraser said.

All Sound Designs created and built a special rack system in the bar area to house the Kramer product and video sources.  The six−foot rack pulls out and rotates 65 degrees for easy access to the equipment and wiring.