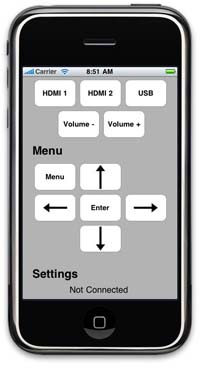 Kramer has created an iPhone App called “VP-729” that allows users to conveniently operate Kramer’s popular VP-729 scaler/switcher.  The VP-729 App provides an intuitive and easy-to-use interface for the most necessary functions of the VP-729.  To operate, enter the IP address of your VP-729 and press the connect button. You can switch inputs, increase and decrease the audio output volume and adjust all menu items over your wireless network.  There is no need to manipulate the front panel buttons or look for the wireless IR remote control.  Just grab your iPhone and start working.

The new iPhone App can be found in Apple’s App Store within iTunes®.  Once in iTunes, search for “VP-729” and download the app.  There is a video posted a video on YouTube demonstrating how to use the VP-729 App.

Kramer has also created new PC-based software for the VP-729 that also works with the VP-728 via the RS-232 port.  This freeware switching and control program can be obtained from the Kramer Web site via the “Downloads” tab on the VP-729 or VP-728 product pages.   After the program is installed on a local computer, it connects via Ethernet to a Kramer VP-729 or via RS-232 to either a VP-729 or VP-728. All the switching and menu functions of the VP-729 and VP-728 can be set and controlled remotely from the connected computer.

The PC-based control software emulates the appearance of the front panel of the Kramer VP-729/VP-728 scalers on the computer screen so that the user can control switching by clicking on the inputs buttons.  If menu control is selected, the VP-729/VP-728 menu appears on the computer screen.  The on-screen menu is visually identical to the menu generated by the scalers on a connected display and the user has full control over all features including the ability to define and set custom resolutions.

The new VP-729 and VP-728 PC-based switching and control software can be found on the VP-729 or VP728 product pages via the “Downloads” tab or under the heading “Software” on the “Software Firmware Updates” page on the “Support” tab of the Web site at www.kramerus.com .  It is available at no charge as a value-added freeware program.