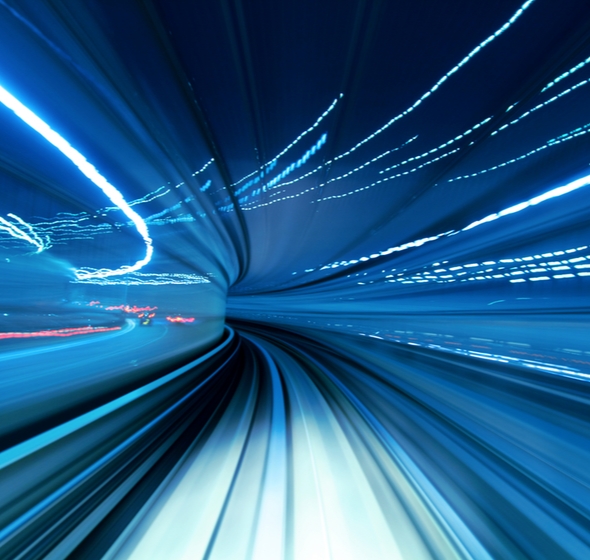 How Fast is ‘Fast Enough’?

The AV industry has arrived at a singularly intriguing point in time. Like the rest of the communications world, we’re getting ready to jump aboard the IT bandwagon and use TCP/IP networks and switches to route and distribute audio and video…leaving the world of uncompressed display signal management behind.

Coincidentally, this paradigm shift is coinciding with another move; this time, from Full HD video to Ultra HD video. But that’s not all: We’ll also have to reckon with high dynamic range content and its associated wider color space. And off in the distance, you can see yet another freight train approaching, with its box cars reading “High Frame Rate Video.”

On the one hand, we’re learning all about codecs, latency, forward error correction, groups of pictures, jumbo frames, and a host of acronyms like DHCP, IGMP, and HLS. On the other, we’re frantically calculating our bandwidth requirements and wondering if we’ll have a fast-enough network to handle all of these high-speed, souped-up pixels.

And that brings up a really good question. Just how fast is “fast enough?” If we’re building an AV-over-IT network, what top speed should we aim for? And how, exactly, can we build some degree of futureproofing into our design so we don’t have to come back a couple of years from now and install new switches and perhaps even new cables?

Still, you need to design for the highest possible speed requirements, and if at any point you want to manage low-latency video using JPEG-based codecs (or other light compression codecs), you’re back in the tens of gigabits per second neighborhood. Currently in our industry, we have manufacturers advocating for 1 Gb/s switch fabrics and others saying, “No, you need at least a 10 Gb switch.”

From our perspective, designing a 1 Gb/s AV-IT network is essentially tagging it with a “planned obsolescence” sign. A basic 4K (Ultra HD) video signal that’s refreshed 60 times per second and has 8-bit RGB color will generate an uncompressed data rate of 17.82 Gb/s, WAY too fast for a 1 Gb/s switch without significant compression. Yet, that’s a rudimentary form of 4K video.

With HDR enhancements, we’ll need to move to 10-bit sampling. We can cut the color resolution from RGB (4:4:4) to the broadcast standard 4:2:2, at which the new bit rate is 14.26 Gb/s – still too fast for a 10 GB/s switch. We could drop the frame rate in half to 30 Hz, slowing the bit rate down to 7.13 Gb/s and clearing the switch without additional help. But maybe the application really needs that higher refresh rate?

This problem is ameliorated to some extent with the SDVoE Blue River NT codec. It applies light (2:1) compression with super-low latency to let us limbo with ease under the 10 Gb/s bar. All fine and good, but what if we want to run a 10-bit RGB 4K signal with HDR and a 60 Hz frame rate from point A to points B, C, D, E, and F? The raw data rate is now 21.4 Gb/s, and even 2:1 compression won’t get us through the switch.

One possible solution is to compress the broadcast (4:2:2) 4K video format by using a lossless codec like JPEG XS (TiCo) to pack the signal down by as much as 6:1, then come out of the decoder with full-bandwidth display connections. Japanese TV broadcaster NHK showed a demonstration last year at NAB of an 8K signal (7680x4320 pixels) with 10-bit 4:2:2 color and 60 Hz refresh, successfully transiting a 10 Gb/s network switch thanks to 5:1 JPEG XS compression.

So many numbers to think about! But that’s our new world as we continue to push up pixel counts and bit depths. And we haven’t even talked about gamers and virtual reality enthusiasts, who would prefer to see frame rates well above 60 Hz to minimize motion blur. Assume 96, 100, and even 120 Hz for these specialized applications and run the calculations again. (You’ll probably want to jump out the window when you’re finished.)

It’s all too easy to increase bit depth and frame rates for 4K and 8K signals and wind up with data rates that would warrant speeding tickets. But our job as integrators is to provide some sort of future-proofing in any installation…which is why our industry might want to start looking at 40 Gb network switches.

Yes, they exist, although mostly as selected ports on hybrid 10 Gb / 40 Gb switches. And it goes without saying that those 40 Gb ports are using quad small form pluggable (SFP) optical fiber connections. These switches aren’t insanely expensive: We found several models through an Internet search that are priced between $3,000 and $8,500, and although not “pure” 40 Gb switches, they will do the job.

So – is a 10 Gb network switch “fast enough?” Or maybe we need a 40 Gb switch? Believe it or not, 100 Gb switches are in development. Is THAT fast enough for you? Better check your math…