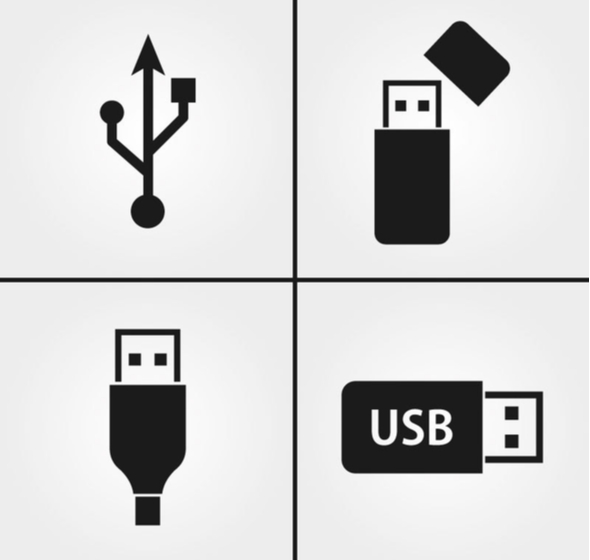 While You Weren’t Paying Attention…

A news digest publication we receive each week, appropriately called The Week, features a small section of stories each month under the heading, “Boring, but Important.” That description suits this post quite nicely, as it details the latest specifications for the Universal Serial Bus (USB) – version 4.0.

We tend to take USB for granted, as it is kind of boring. We don’t think much about those receptacles on the sides of our laptops and mobile devices. Most of us use them for charging up smartphones and tablets and connecting thumb drives and other external storage to laptops and desktops, along with wireless keyboard and mouse receivers. And we usually complain that there aren’t enough USB ports and buy USB hubs to connect scanners, printers, and other peripherals.

The original USB specification was released in January of 1996, and the first devices equipped with USB 1.0 connectors made their appearance 24 years ago this month. (Happy birthday!) That’s a lifetime in the world of computer peripherals: USB version 1.0 supported data rates of 1.5 megabits per second (Mb/s) in low-speed mode and 12 Mb/s in full-speed mode. In contrast, the current version (3.2) clips along at 20 GIGABITS per second (Gb/s).

Version 3.1 also did away with seven different connector styles (not to mention an entire cottage industry of between-version adapter plugs and cables) in favor of the Type-C symmetrical 24-pin plug and jack, and added some intelligence to the connection so it could do more than just provide 5 volts of charging voltage and move data back and forth. Now, a “triple play” was possible, connecting power, data, and display.

By all accounts, the Type-C connector is durable and popular. (Ask anyone who has fumbled in the dark with a Micro USB plug to charge up a phone, or broken a Micro plug while trying to push it into a Mini jack.) It takes up a lot less room on laptops, making for thinner and lighter designs as optical disc drives and bulky hard drives are also jettisoned. And it’s fast, no doubt about that – while writing this missive, we just backed up large music and photo files to an external Type-C solid-state drive at an average rate of 150 Mb/s.

So, why should we care all that much about enhancements to USB? The answer is simple – more and more peripherals are using USB as their only connection to the outside world. For example, during the current COVID-19 pandemic, sales of webcams and other streaming devices are through the roof. While more expensive cameras do provide a variety of connector options, lower-price models rely exclusively on USB ports for video and audio. And the same is true for most computer headsets.

The USB 4 specifications, announced while you weren’t paying attention last fall, build on Intel’s Thunderbolt technology to raise data transfer rates to 40 Gb/s over version 3.2’s 20 Gb/s. While very few current models of laptops have USB 3.2 ports on them, you can be sure future models will step on the gas – the USB Implementer’s Forum (USB-IF) estimates that devices with USB 4 ports will start appearing toward the end of this year.

The extra speed isn’t just for data. USB 3.1 introduced the concept of Alternate Mode, meaning one or more serial data lanes can be repurposed to also serve as display connections, all the while continuing to transmit data back and forth. DisplayPort version 1.3 was the first implementation and HDMI 2.1 will also travel nicely over this connection. If you want to connect an Ultra HD computer monitor via Alternate Mode using 10-bit RGB color at 60 Hz, you’ll need to sustain a data rate of around 21 Gb/s. And if you plan on running data back and forth at the same time – well, you get the idea.

What’s different about version 4 is that it uses tunneling over two lanes to move everything. From the USB-IF press release: “Key characteristics of the USB4 solution include two-lane operation using existing USB Type-C cables and up to 40 Gbps operation over 40 Gbps-certified cables, multiple data and display protocols to efficiently share the total available bandwidth over the bus, and backward compatibility with USB 3.2, USB 2.0 and Thunderbolt 3.”

The term “smart interface” certainly applies here. Version 4 is expected to be much more efficient in allocating bandwidth for simultaneous transmission of data and video. If a monitor is using 20 percent of the available bandwidth for video, the remaining 80 percent could be used for data. And a new feature, USB Power Delivery, is an intelligent charging protocol that allows negotiation of faster (or slower, but less battery-draining) charge rates for mobile devices.

Historically, the AV industry has relied on separate connectors for separate functions…HDMI for display, category cable for IT networks, RS-232 for control, unbalanced and balanced connectors for audio, and of course USB for data and peripherals. For long signal runs, we’re tilting back and forth between using category wire for proprietary HDMI/audio/control extenders, or for AV-over-IT networked applications.

Is it time to think instead about moving to a “tunneled” approach for long signal runs, aggregating video, audio, data, and control packets using USB 4 protocols and also supporting connected peripherals such as keyboards, mice, printers, scanners, Webcams, audio interfaces, and PTZ cameras? Logic says yes, but the immediate obstacle to that implementation is the data rates involved:  HDBaseT is still stuck at USB 2.0 (max. 480 Mb/s), and AV-over-IT applications are centering around 10 Gb/s network switches.

However, there’s always optical fiber, which serial data interfaces travel over very nicely. Consider that 12G SDI interfaces and cables are already being implemented for 4K and 8K video production and transport. Two such interfaces (which actually run at 11.6 Gb/s) could easily handle USB 3 data rates, while four fibers could carry USB 4 data without breaking a sweat. Multimode fiber would be more than adequate for extenders with its range of nearly three miles.