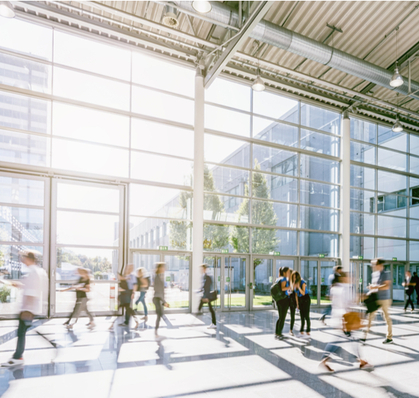 Wish You Were Here

It’s hard to believe, but we’ve lived through six months of the COVID-19 pandemic already. (And that’s six months we’ll never get back.) As disruptive as the pandemic has been, people have still come up with clever workarounds. Perhaps the biggest challenge was how to stage conferences and trade shows, which require people to (a) get on a plane and travel to the conference site, and (b) walk the trade show floor and sit with others in seminars, workshops, and keynotes.

So, 2020 brought us something new: The virtual trade show. We should clarify that the concept isn’t entirely new, as some AV manufacturers have tried it in the past. But this time around, exhibitors and attendees had no choice – the only way we had to see new products and hear about new technologies and processes was to turn on our home computer, register for the event, and log into the event Web site.

While attending a trade show or conference this way has certain advantages (no security screenings, boarding lines, taxi fares, and no overpriced hotel rooms and show floor food), there really isn’t any substitute for seeing products in person, catching up with colleagues, and having one of those many serendipitous ad hoc conversations to trade notes on what everyone else saw.

We’re well through trade show season now, and the jury is still out on how effective the virtual versions of NAB and InfoComm turned out to be. IFA will be limited to 1000 members of the press attending in person (if they’re lucky to get that many!), while IBC, NAB New York, and even CES 2021 have all opted to go virtual. It will be a long time before any of us prints out an exhibitor, press, or attendee badge and hangs it on a lanyard again!

One show in particular suffered perhaps more than others – the Society for Information Display (SID) annual exposition. Originally scheduled for late May, it went virtual in early August, with many sessions still accessible as of early September. But exhibitors didn’t hold back – this is the event where cutting-edge display tech usually takes its first bows and we get a look at the future of displays even though many of the products shown are still in prototype stage.

Based on the many press releases and photos we’ve received, it’s clear that just about all of the innovation is happening in large, self-contained displays. While prominent manufacturers like Samsung, Panasonic, and LG Display are turning their backs on liquid-crystal display (LCD) panel manufacturing – decisions attributable to evaporating profits – they’re sinking more cash into emissive display products including white OLED with color filters (WOLED), quantum dots driven by blue OLEDs (QD-OLED), quantum dots driven by blue nanorods, and micro and mini LED displays.

The fact is, unless you are manufacturing LCD panels with large mother glass sizes in China, you might as well just take your cash, pile it into big hills, and set it on fire. You’ll get the same result, but much faster. Even the Chinese display behemoths like TCL, BOE, TPV, and CSOT are finding good profit margins in LCD panel manufacturing much harder to come by. (And forget projectors – their market share is getting hammered by ever-larger and cheaper LCD displays at one end, and tiled mini LED displays at the other.)

What’s fascinating about this new generation of displays is that they’re all emissive in design. That is, the light they throw off comes directly to your eye, and not through layers of light shutters, color filters, and polarizers found in LCD displays. That translates into better contrast, deeper black levels, and wider viewing angles; all of which used to be characteristic of cathode-ray tube (CRT) televisions and monitors 25 years ago. (Ergo, what was once old is basically new again!)

Even better is that emerging technologies like quantum dots and mini/micro LED aren’t brightness-limited like CRTs were. Even WOLED displays like premium 4K TVs, production monitors, and digital signs can achieve luminance levels of 700 candelas per square meter (cd/m2) with small-area full white signals. Displays equipped with quantum dots push well past 1,000 cd/m2, while mini LED (classified as LED displays with a pixel pitch less than 2.5mm) can easily reach 3,000 cd/m2. By comparison, a full white screen on a CRT grading monitor would measure only 100 cd/m2.

This move to bright, saturated images couldn’t come at a better time, as high dynamic range (HDR) imaging with its associated wide color gamut (WCG) is becoming popular. Combined with high-resolution 4K and 8K displays with ever-larger screens, the popular descriptions of “being there” and “like looking through a window” couldn’t be more apt.

Next-generation displays aren’t just about brighter images with highly-saturated colors. The next frontiers in display tech are flexibility and transparency. Think of folding smartphones and see-through televisions, products that have been in research and development for over a decade and are only just coming to market. How about TV screens that can wrap around poles and stanchions, or be shaped into the petals of a flower? There are also enhancements to touch screens and even touch-less screens that use ultrasonic sensors to operate cursors, open apps and windows, and play, fast forward, pause, and rewind video.

All in all, it’s pretty amazing stuff. At some point, when the pandemic runs its course, you’ll be able to see these cool display products in person, just like the good old days of 2019.

Until then…wish you were here…