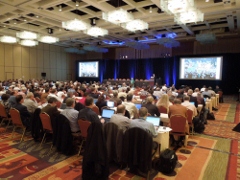 Set it and forget it…it works! Attendees at the Hollywood Post Alliance® Technology Retreat in California witnessed first−hand the ease of a fully HDMI−based presentation system. During a panel discussion about next−generation projector technologies the newest “lamp−free” projectors and a successful “hot” switching of multiple laptop presentations were highlighted for an audience of more than 500 people. Six presenters and two moderators connected a variety of MACs and PCs “on the fly” at the podium, displaying presentations on two 16−foot projection screens.

According to AV technology consultant Pete Putman, who co−moderated the discussion, he decided to show an example of the new hybrid projection technology instead of just talking about it. To build the system, he chose a Kramer Electronics VP−728 ProScale™ Digital Scaler/Switcher that would manage all of the anticipated input signals. He showcased two 3500−lumen XGA light−emitting diode projectors, which letterboxed the displays to a 16 x 9 image. “We had no idea what sources the presenters would have, but we knew the VP−728 would be able to handle them, recognizing and reformatting the signal and establishing the right resolution,” he said.

High−level executives from television networks, movie studios, post−production houses and corporate production departments enjoyed a seamless demonstration, as the presenters took their turns at the podium. Each speaker interfaced his or her notebook computer to the VP−728 switcher through HDMI and DisplayPort/HDMI adapters. The switcher converted all signals to 1280 x 720 HDMI output for display on the projectors. The switcher was connected to a Kramer VM−4Hxl 4x1 HDMI distribution amplifier by a 25−foot Kramer HDMI cable, which in turn was connected to each of the projectors by a pair of 50−foot Kramer HDMI cables. The system used the switcher’s analog audio connections to connect to the ballroom’s audio system.
“The transitions were quick, and there wasn’t as much as a hiccup with the system,” Putman said. “The switcher was smart enough to recognize the signal resolution and it cropped the picture beautifully. We proved the ‘set it and forget it’ mentality.”

Normally, a big−screen presentation in a large ballroom or auditorium would use DVI or VGA signal distribution at the podium with the signal running back to a master control system and to a preview monitor prior to being shown on the projection screen. Putman said that even though his system used the more complex HDMI digital interface standard for switching and distribution, it worked because the VP−728 recognized every signal from every computer, regardless of maker and operating system. He noted, “It didn’t matter what presenters brought in the door. The VP−728 figured it out.”