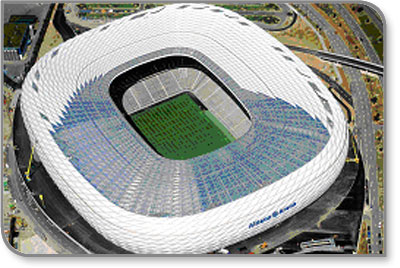 Videlco, Kramer Electronics distributor in Germany has carried out many projects containing Kramer products. Among them are the Century Hall in Bochum, the Jewish Museum in Berlin, The Situation and Information Center (LIZ) of the Federal Government in Berlin and, lately, the Allianz Arena in Munich.
The Allianz Arena is the brand new soccer stadium in Munich-Fröttmaning, Germany. The intiative to build this modern stadium has already begun in 1997 and it was finally accomplished in summer 2005 ceremoniously opened on May 2005. This 280 million Euros state of the art construction is where the FIFA World Cup opening game will take place on 2006.
The stadium offers 66.000 covered seats on three tiers, with over 7.000 m2 area for food stands. A special eye catcher – the façade of the Arena (24.000 m2 - biggest membrane shell in the world) can be illuminated in three colors (white, red, blue).
Naturally, as far as video equipment is concerned, the stadium includes the best and most advanced technology. There are two 100m2 sized LED-video screens (picture format approx. 16:9) mounted above the North and South goals at a height of 42,5m. The resolution of the displays is 288x512 pixels with pixel composition of 2 red LEDS, 1 true green and 1 blue. It has a total number of 589.824 LEDs. For best results in colour display and resolution, they are using the VP-725, a true multi-standard video to graphics scaler and presentation switcher . Thanks to its many options and functions (especially the excellent colour matching), it is the best device for a high quality display on such LED-screens.