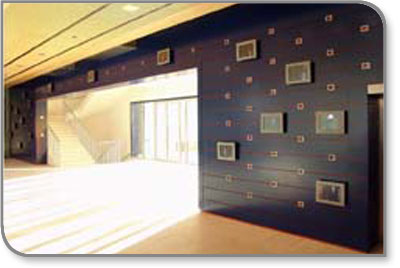 Bertelsmann, the media powerhouse, has turned the old Gendarmerie Building of Berlin into its House of Representatives and an advanced interactive multimedia center with a Kramer Electronics switcher at the heart of the system. The building was originally built in 1650 as the first building on "Unter den Linden" street. Since 1799 and during the "Weimarer Republik" it was the "Stadtkommandantur", which meant it was the headquarters for the "Stadtkommandant" (police commissioner). In the Second World War the building was heavily damaged.

In 2002 Bertelsmann renovated the exterior in the original 17-18 century classic style and the inside in a modern high technology style. Now the building serves as the Bertelsmann AG and Bertelsmann Foundation “House of Representatives”, where conferences, presentations and charity events are held. It is also now home to a multimedia center. There are 106 plug & play connectors installed on the blue walls of the buildings foyer. Here, visitors can plug an LCD-Panel into any of these connections and receive visual information about Bertelsmann''s activities.

The information the visitors to the building might see varies. It might be special video clips, the output of a broadcast station or even a live show that is being captured and sent through the system. The switching of the various sources to the 106 out put connectors on the wall is performed with a Kramer Electronics Tailor Made Matrix Switcher (40x106). The Kramer Electronics switcher along with other equipment was supplied by VIDELCO GmbH to the installers Pro Video and TSM. Bertelsmann is a leader in the world of media. They are an owner of numerous TV and radio stations. They also own several publishing houses, including Random-House.