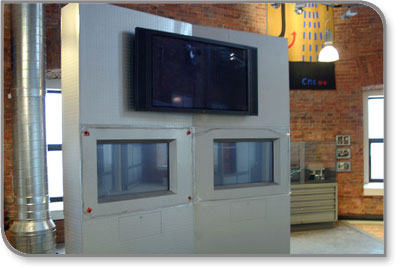 The opening of the museum for the public is dedicated to various water-related technologies (water use, conditioning and purification) and Kramer’s VP-300, RGB distribution amplifier, plays a part in an interactive stand that runs a presentation about various water facilities.
The presentation system, built by “A Screen”, is using a 61’’ and two 42’’ plasma screens with interactive touch screens. A dedicated software allows starting a video playback on the large screen by a touch of a corresponding icon on a 42’’ panel. The second 42’’ panel is used for running a presentation, accompanying the video, or displaying any other related information. This significantly simplifies the guide’s job, who acts as a mere operator of the system. The narration is voice-overed by an “interactive mannequin”, a wax figure, whose face is animated by projection of a specially prepared video. The voice-over comes from ceiling speakers synchronously with the mannequin’s byplay that includes blinking of eyelids and tilting of eyebrows. In addition to the plasma panels and the projector, the system includes a DVD-player, a DVD-VCR combo, a mixer/amplifier, a network switcher, and 3 computers for the system and interactive touch screens control.