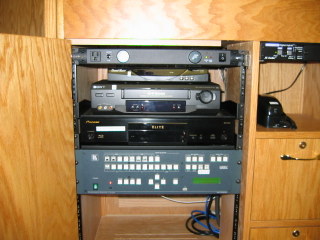 Easy. Simple to use. Push button with confidence. These words echoed throughout the team at St. Alexius Medical Center when reviewing objectives for a new training center. Tasked with creating a whole new building near the Bismarck, ND campus that is home to the 306−bed hospital, the group required a presentation system that could be used daily for education. The users would range from professional presenters and trainers to senior citizens and serve the communities in an around central and western North Dakota, South Dakota and eastern Montana.

“The system was to be part of a multi−functional facility, and our paramount challenge was simplicity,” said Jeff Beauchamp, director of biomedical services at St. Alexius Medical Center.

Local audio/video designer and installer Dakota Sound Systems worked with St. Alexius design technicians Justin Wilson and Rob Hoffman to assess the challenges of a new technology center. Together, the team created a design that features a training room that can be divided into four rooms, each seating up to 40 people. The rooms work together in pairs, with equipment shared between them. Each room has a projector with a projection screen and a custom podium where the presentation can be controlled with a Kramer RC−74DL master room controller.

The panel has 12 programmable buttons that can be color−coded in groups of three, back−lit and labeled for easy source identification. The equipment rack includes a Kramer Electronics VP−725N Proscale® presentation digital scaler/switcher with 21 inputs that manages several sources including a Blu−Ray DVD player, digital tuner and VCR. The system also uses a Kramer Electronics (model #) 4x4 HDMI Matrix switcher and a multiple sets of Kramer PT−571 and PT−572+ twisted pair transmitter/receivers. The system allows the option of sending the same content to both screens or presenting differing content on each screen.

“The presenter simply presses the ‘on’ button on the control panel and the system automatically lowers the projection screen, turns on the projector and switches to the desired source,” said Jay Griffin, vice president and co−owner of Dakota Sound Systems. “The Kramer product had the compatibility and the ease of use we needed for this project. In addition, the Kramer technology support group was always available by phone to work out any bumps,” he said. Likewise, Dakota Sound Systems extended that technology support to the team at St. Alexius, training and supporting them at any time.

Officials at St. Alexius note that they met their objectives with Kramer Electronics products in the system. “We wanted to be able to push one button and have the system work. We reached that goal,” Beauchamp said. “In addition, we are comfortable that we’ve set the stage for expansion by selecting Kramer Electronics products. We are poised for the future, yet still have a simple, easy−to−use system that meets our needs now,” he concluded.