Located in Kingman, Arizona, the recently completed Mohave County Superior Courthouse is a 20 million-dollar building with four stories, seven courtrooms, four jury rooms, two conference rooms, and over 100 employees. A long-awaited addition to the county’s judicial system, the new building’s AV setup provided a unique set of opportunities—and obstacles—for the court’s IT team, from the initial design process through to ongoing maintenance and planning for future expansion.

The Expert, and the Challenge

For the past 18 years, Kyle Rimel has worked as IT director for the Mohave County Superior Court. In September 2020, he was awarded the G. Thomas Munsterman Award for Jury Innovation from the National Center for State Courts (NCSC) for his role in quickly and effectively transitioning jury selection to remote at the outset of the COVID-19 pandemic.

Instead of relying on an outside vendor to install and maintain AV for the new courthouse, Rimel and his team—most of whom are certified in Kramer—were tasked with creating a custom solution from the ground-up. He explained, “The original cost to complete the building was just too expensive, so they started cutting costs. Two years ago, when we kicked off the building design, our presiding judge asked me specifically, ‘Can you implement the AV yourself?’ I was confident I could take on that level of work, and because of that decision, we were able to pull the trigger and move forward.”

From the very start of the build, Rimel noted that he and his team were able to purchase Kramer products directly from CDW—providing necessary autonomy and helping cut costs on the installation. “That was another selection point for me to move forward with Kramer,” he said. 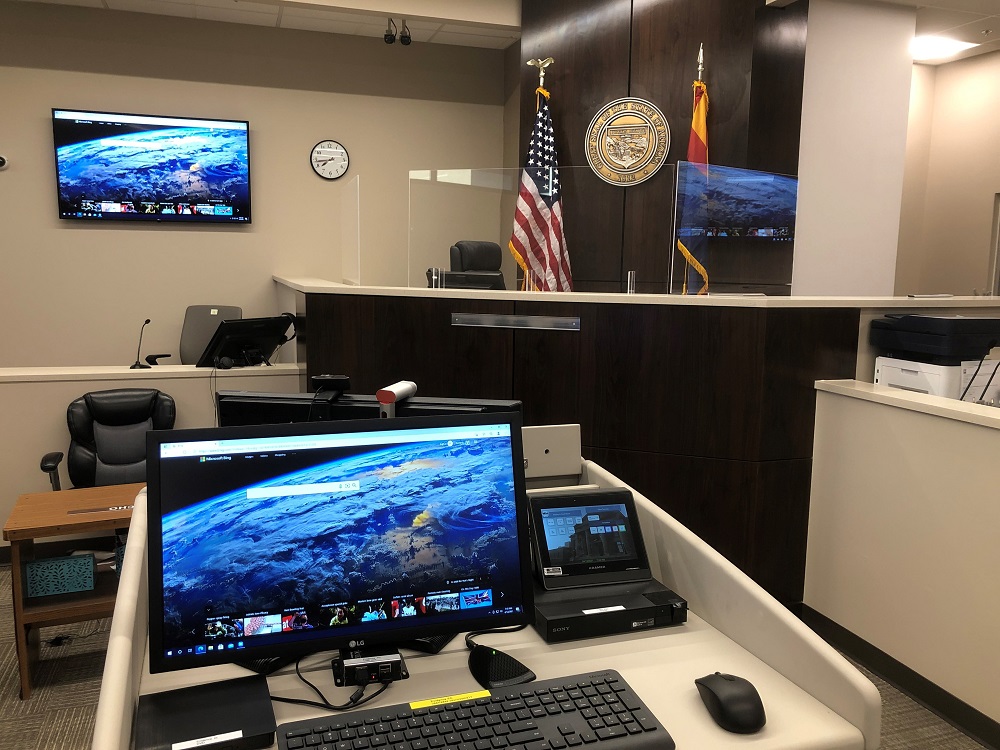 Spanning both sides of the Grand Canyon, Mohave is the fifth-largest county in the United States. This makes even intra-county travel a difficult process—let alone travel from larger cities such as Flagstaff or Phoenix. And so for Rimel and his team, being able to troubleshoot and make on-the-fly changes to the courthouse’s AV interface without outside support was critical.

“We don’t have any AV companies here in Kingman, Bullhead City, Lake Havasu City, or anywhere within a hundred miles, and if we have something fail, we can’t afford to wait four hours for somebody to drive from Phoenix,” Rimel said. “We need that courtroom up and running, so we needed to build a system internally that we could maintain.” This is where Kramer gear stood apart from its competitors.

“Right away Kramer’s interface was much easier for us to follow, maintain, and implement. We looked at other Kramer products and found that they offered the majority of the solutions we were looking for, so we selected them for our new building.” Rimel explained, “I was able to add hardware, add individual images, build my touch panels, and get a working system within a matter of a couple of days.”

Kramer Technology in (and out of) the Courtroom

Rimel and his team installed Kramer’s VP-444 for video switching, the VM-218DT for monitor distribution, TP-580R’s to receive the video signal at each of the eight monitors, the PT-571 and PT-572+ to extend the inputs from the attorneys’ tables and lectern for all other inputs (Blu-ray players, and document cameras). All equipment is running over a CAT6 cabling infrastructure and controlled by a Kramer SL-240C with two integrated Kramer touch panels.

For a busy courtroom setting with several users on any given day, ensuring the system was intuitive was of utmost importance. “I have designed separate pages and buttons on the Kramer touch panel to control many different pieces of equipment. For example, I have built a separate page just to control the DSP to allow the Judge to control each individual microphone, pump white noise into the courtroom or adjust the audio levels into and out of the courtroom,” Rimel said. Fully integrated control of the video conferencing system and PIP controller will allow the Judge to choose which of four different camera views he or she wishes to display to the remote parties at the touch of a button.

The reception from judges, Court Administrators and Board of Supervisors has been overwhelmingly positive in favor of the new Kramer system—a night-and-day improvement over their old VGA environment. Rimel explained, “Prior to this setup, judges were not able to control audio at all. Some judges literally had to go to the amplifier and increase or decrease the volume. Even though we had some volume knobs, the way we did it, was archaic. We’ve evolved.”

Bringing Everyone Up to Speed

After a successful installation at the courthouse in Kingman, Rimel and his team are now looking toward a future pair of projects elsewhere in Mohave County. First, they plan on completely renovating the old courthouse—a 100 year-old building that played host to a “mish-mash” of different types of audiovisual technologies. Second, one of the county’s municipal courts has also decided to construct a new building, which will include three additional courtrooms.

When probed as to whether he will be using the same Kramer equipment in these two projects, Rimel gave a definitive, “Absolutely. I’m designing the systems now. As we speak, my desk is covered with all sorts of drawings and diagrams on how things are going to be completed.”

But if the new courthouse is any indication, then a promising AV future for the Mohave County Judicial Branch is already coming through loud and clear. Rimel concluded, “The amount of work my team and I have invested into this building and specifically each individual courtroom has been tremendous, from design to installation, but as a result we now have an audio video system that provides the same level of services and advancements that a professional AV company could have installed for us. In addition, we are now positioned to provide immediate support or changes ourselves to provide even greater return on investment.”