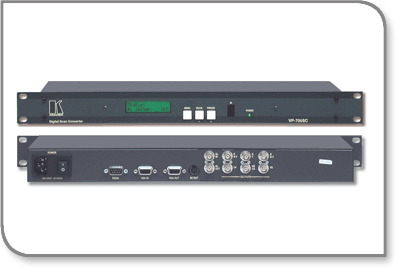 The major Spanish television station TVE, buys four more units of the Kramer advanced Scan Converters, VP-706SC. This acquisition follows TVE’s satisfaction with two units previously purchased and tested in a unique application. The machines are used in the Canary Islands TVE television show "Alternative Music", and in other cities, currently also in Paris. The uniqueness of the application is that computer generated images and animations are combined into video broadcast. Unlike the traditional applications of scan converters in converting computer tables (Excel), texts (Word) or presentations (Power Point), in this case the application converts more complex computer generated images and animations to video, while the animation may be programmatically driven by music. The VP-706SC Scan Converter, a Kramer''s top of the line machine, allows this type of application thanks to its Genlock for "glitch free" operation while converting computer generated graphics to video.