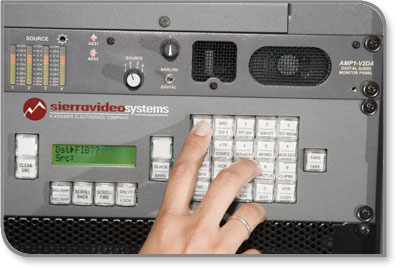 Hampton, NJ – November 17, 2005 – The Ant Farm, one of the world’s largest advertising post-production facilities, recently chose Sierra Video Systems, a Kramer Electronics Company, to provide the routers at the heart of this facility. They chose Sierra Video Systems for their reliability, a price point that fit within their budget, and the company’s popular trade-up program. The Ant Farm creates and produces advertisements for feature films, television programs and video games. Since its inception in 1998, The Ant Farm has grown both in business and technology. When they opened a new 36,000 square-foot facility in Los Angeles, CA, in 2003, they chose a nine-level Sierra Video Tahoe System router, allowing room for expansion. Within a year, The Ant Farm actually outgrew the routing system. “We grew much faster than we had anticipated, so we looked to Sierra Video Systems again to upgrade and expand,” said Craig Frieman, Systems Engineer at The Ant Farm. “We originally chose Sierra Video products because of their reliability and a price point that fit our budget. We haven’t had a single moment of downtime from any of the equipment, so when we wanted to transition to a larger system we looked to Sierra Video.” Because of the Sierra Video Trade-Up Program, the upgrade was easy. The Ant Farm could receive a credit on their existing equipment when they traded it in for a higher level system. With the help of the Sierra Video team and the local broadcast integration specialists at Mason Engineering, LLC, The Ant Farm upgraded to the larger Yosemite Series routing system, which provides both analog and digital solutions from 32 x 32 to 128 x 256. The routing switchers are supporting over 50 Avid Editing suites in use virtually 24 hours a day. Serving Hollywood’s biggest studios means reliability is paramount. “A single hour of downtime could mean the loss of thousands of dollars for our business, so it was important that we make a smooth transition that did not interfere with our production schedule,” Frieman said. Together, Sierra Video, Mason Engineering and The Ant Farm used a systematic approach over a four-week period to test, reconfigure and upgrade a new system without any loss of time. “The Sierra Video Systems equipment is ideal for companies like this who are destined to grow,” said Ron Mason, co-owner of Mason Engineering, LLC. “This upgrade allowed the technicians to use the same control panels, so in their view, there were no operational changes -- everything just happened to be running through a bigger router.” To ensure a glitch-free installation, Sierra Video bench tested all of the hardware prior to shipping. Mason Engineering installed seven audio/video frames to handle composite video, digital video, analog audio, time code and RS-422 machine control, pre-wiring all the levels of the new router through new patch bays. A complex audio layer is also wired through patch bays to the Sierra Video routers. In addition, the system includes two SCP-240 programmable control panels, which offer system flexibility and functionality.