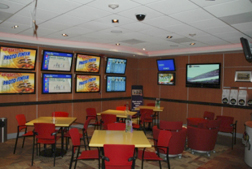 Play City sport bets and entertainment centres open their doors to the public in general and call players to great amusement and entertainment, in their three modalities: Traditional Bingo, Electronic Slot Machines, and Sports Bets. In these centres, video and audio distribution is primordial for the event and Kramer / Sierra Video Systems handles successfully the package. The request is to distribute, in a dynamic, simple, and reliable way, the audio and video signals incoming from 32 sources, to be distributed to between 76 and 96 plasma display screens, depending on the surface of the several sites, which oscillates between 3000 and 5000 m2.
Play City is a new concept in adult entertainment centres, based upon sports bets and electronic slot machines, but when it comes to vital video and audio signal distribution, decision making is no longer a question of games: the devices required must be robust, reliable, affordable, and professional. This is why Play City does not play around with their distribution infrastructure, and relies on Kramer / Sierra Video Systems for these tasks. We know how important and critical the video / audio signal presence and quality is on this type of sites. This is why Play City receives top of the line quality equipment.
Video and audio signals come from several sources (satellite streaming, satellite TV, and cable TV decoders, as well as DVD players), but share a common ground: composite video, with stereo audio. Signals must be distributed into several main areas:

1. Electronic Slot Machines Section
2. Bar
3. Sport Bets and Racers
4. VIP rooms (which may vary from 1 to 3)
5. Lobby
6. Traditional Bingo (Numbers)
These sections may be divided into several areas for audio distribution.

Requirements are standard for high resolution composite video signal, to be distributed throughout a network which runs along with power lines, light dimmers, ballasts, spot lighting, and neon lines, etc., which radiate a large amount of ESI and EMI (electrostatic and electromagnetic interferences). The video routing switcher used is a Sierra Video Systems Yosemite 32X96 Model 3296VR, with both control processor board and power supply redundancy. This equipment offers hot swappable board capability, which ensures seamless operation even in the infinitely remote event of a board failure. The Yosemite line offers this thanks to its broadcast and professional video features, with a bandwidth superior to 100MHz for composite video. Audio spectrum transparency is also a must, with a bandwidth between 20 Hz and 20 kHz. To ensure audio distribution to each and every section, with professional audio quality, we used Sierra Video Systems audio routing switcher Tahoe 3232AAR Model, a 32X32 balanced stereo audio routing switcher, with redundant power supply. Control to this matrix comes directly form the Yosemite routing switcher, and can be configured both as audio-follow-video (AFV) or breakaway. For this specific application, audio breakaway is configured. Control is provided separately in two remote control panels, one for video and another for audio. Because of the higher complexity and diversification of section in the audio distribution, a Sierra Video Systems SCP-224 remote control panel is used for the audio routing switcher, and a SCP-112 is used for the video routing switcher. Both panels are multi-level and customizable, ensuring the end user the most ease to use control panels available, thus making the routing operation both simple and intuitive. Neither technical background, nor experience is required to operate Sierra Video Systems routing switchers, once the panels are customized and configured. Such is the degree of intuitive control they provide.
Besides the audio signals coming in from the AV sources, a variety of microphone and external stereo audio signals can be fed into the router, such as i-Pod music players and Discmans. Microphones are scattered along the whole complex, both in fixed positions as well as wireless microphones. Incoming signals must be fed as balanced audio, at line level, to the router. This is accomplished using Kramer devices, such as the VA-4, an audio pre-amplifier, used to raise microphone signals to line level, as well as WA-21, to balance audio signals coming from portable audio players, such as i-Pods and Discmans). The idea is to allow customers to connect their portable devices and listen to their music play lists. Audio distribution is complemented by using several of Kramer’s VM-1110xl audio distribution amplifiers, whose quantity varies between 3 and 9, depending on the size of the Play City site they are allocated in.
Everyone over 18 years old is invited to win and have fun in Play City, and Play City wins the video and audio distribution bet, with the highest quality in its gear, by using Kramer / Sierra Video Systems.