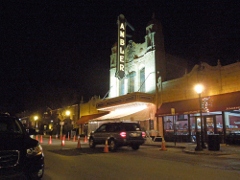 The glamour of the Oscars made a red carpet appearance at the Ambler Theater in Ambler, PA, thanks to the help of the Kramer Electronics VP−728 ProScale™ Digital Scaler/Switcher, Kramer PT−571/PT−572+ DGKat™ twisted pair transmitter/receivers and Kramer DGKat twisted pair cable. The annual Oscars party at the non−profit, community−based movie theater welcomed hundreds of guests for pre−awards show activities and the Oscar broadcasting high definition splendor.

When planning the party, executives at the Ambler Theater hoped to show the Bravo “red carpet” pre−Oscars HD telecast, the live Oscar broadcast, the Ambler Theater’s Oscars poll and live event announcements and raffle winners on all three of the theater’s screens. They also wanted to broadcast the Awards show in the theater lobby.The theaters were already equipped with high−brightness LCD projectors and a digital cinema server with HDMI output.
A/V technology consultant Pete Putman knew the event would require seamless switching capability to achieve all of the goals. He recommended Kramer Electronics equipment for the job. “The event required a switcher that could communicate easily with the different brands of equipment already in the theater and run it at a resolution of 1280x720p/60,” Putman said. “The Kramer unit is well−known for its flexibility and ability to deliver stunning picture quality.”

Using the Kramer VP−728 ProScale Digital Scaler/Switcher along with Kramer DGKat PT−571/PT−572+ twisted pair transmitter/receivers, Putman achieved the necessary switching capacity for all of the sources. The twisted pair equipment was connected to the off−air tuner and cable box for the pre−Oscar show,the digital TV receiverthat carried the Academy Awards, the laptop computer for the Ambler Theater’s polling results and the HD camcorder that was recording the live party announcements. The camcorder, located in an upstairs conference room, was connected through 100 feet of Kramer DGKat twisted pair cable for a crystal−clear signal.

To show the Awards broadcast in the theater lobby, Putman added a second Kramer ProScale Digital Scaler/Switcher to feed an off−air HD720p signal mixed with graphics and video clips from a notebook computer to another Sanyo LCD projector. The mix created an attention−getting show on a 92−inch screen for guests strolling through the lobby area.
“The team at the Ambler Theater was really impressed with how quickly and smoothly the VP−728 handled switching all of the inputs,” Putman said. “There wasn’t a single hiccup.”
The Kramer Electronics equipment earned its own award of satisfaction at the Ambler Theater Oscars party.