Joe Gibbs Racing (JGR) is a group of NASCAR racing teams owned and operated by Joe Gibbs. JGR first started racing on the NASCAR circuit in 1991. The teams race in the NASCAR Sprint Cup Series and the Xfinity Series. Since 2000, they have amassed three Sprint Cup Championships.

Joe Gibbs Racing does its own AV switching and control installations. They require quick turnarounds on a weekly basis because the haulers are often on the road. With four drivers on the NASCAR circuit, both the cars and haulers travel more than 30 weeks out of the year. And their extensive travel and bumby roads requires the mobile systems to maintain secured cable connections.

Eight K-Touch systems were installed on hauling trucks and in pit boxes, allowing crews to keep track of races at every turn. In each hauler and pit box, six inputs and sixteen outputs provide high-quality video from any source at any time. Inputs include broadcast feeds from NASCAR and feeds from cameras around the track and inside the cars. There are also several computers displaying data on lap times, track position and weather radars.

Kramer locking HDMI cables were used to secure the connections in the trucks for grueling NASCAR travel requirements.

“With K-Touch, the crews put in their desired sequence for the video and push a button for it to go right to the display they want.  K-Touch eliminates the need for crews to call an AV engineer every time they need to switch inputs,” said Jim Foley, Chief Technology Officer at Joe Gibbs Racing.

“The more the pit crews use the system, the more they discover needs for additional presets. It’s always evolving and we’re adding as we go. The crews download from the Cloud and they’re all set. They’re very impressed by the system,” added Foley.

“The crews can pull up the weather radar or other information on the displays quickly if they need it. They don’t need to see the weather constantly, but they can access it as necessary.” 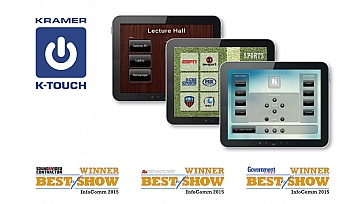