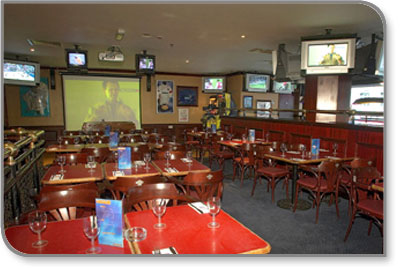 Metropolis AV & FX has completed a major technical refurbishment at the Sports Café in London’s Haymarket. The project follows on from Metropolis’ design and supply of the complete lighting, sound and AV system to the latest Sports Café in Manchester, and their long-term servicing of the maintenance contract at the flagship London operation. Upstairs, Metropolis replaced all the old TVs with 28" and 32" widescreen televisions, installing a total of 33, plus one of the new Generation 6 Panasonic TH42 PW6 plasma screens – the first in the UK. Two new Sanyo PLC SL15 video projectors were also installed – again some of the first in the country - fitted with protective POAP smoke housings to extend longevity.

Metropolis also fitted an additional six Bose Panaray speakers to the existing audio system, and re-calibrated the system to spread the sound more evenly around the area. The existing RF cabled network for the video was stripped out and replaced with a full composite video system. This is distributed throughout the building via 10 video distribution amplifiers, fed from two Kramer VS-162V video matrix units that allow any video source/s to be sent to any destination. The Kramer devices were picked for their reliability.

All the Sports Café’s audio sources are routed via a Soundcraft Spirit Live 4 x 2 console to a new Allen & Heath IDR8 multi-processor for EQ, compression, limiting, etc. The system has been set to run as ‘loud as is safe’, and also has limits set to prevent abuse and overdriving. Metropolis’s project manager was Stuart Clowes, who worked closely with Shane Winterbourne who designed, engineered and oversaw the installation of the new elements. Please see Metropolis AV & FX for more information. Thanks to Louise Stickland for her kind permission to use the attached images.