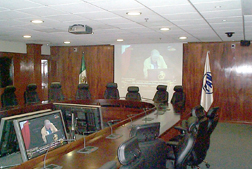 Mexico City has recently had the “Torre Azul” (“Blue Tower”) added to its skyline. This impressive, high technology building takes its name from the official colors - blue and white - of the insignia of Mexico''s ruling party. Torre Azul is the party''s headquarters and communications centre, where all information coming from the National Senate House are analyzed and discussed, and where the party’s members, senate advisors and spokespersons take action on these issues.

The building contains a complex network of video, audio and VGA signals, and Kramer is there to route, switch, amplify and distribute these signals. This technology is the backbone of a critical video, audio and information infrastructure required to get the legal apparatus of the party’s senate running, and Kramer provides reliable 24/7 equipment that complies with the requirements of such a critical and vital application. The legislative decisions taken in this building effect all of Mexican society, so it is essential to mkeep the information flowing, 24 hours a day, inside the party’s senate body. The great performance characteristics of Kramer devices make them suitable for such an enormous project, and the project specifications not only were met, but surpassed.

The decision to install Kramer and Sierra Video Systems equipment in this facility was made by Asesoría Profesional en Comunicaciones (APC), one of the main Kramer dealers in Mexico, and a very experienced integrator of corporate projects such as auditoriums, conference rooms, virtual distance learning facilities for colleges, institutions, corporate businesses, and government customers.

Mr. Jaime Gaspar, director and general manager of APC, assembled a team of the company’s specialists to design and build the whole system. Mr. Gustavo Cruz, the project leader, led a team of enthusiastic professionals who were dedicated to accomplishing this project.

The core of the project is located in a basement bunker, where a Sierra Lassen 3232VS switcher receives and delivers all the video and audio signals incoming from satellites, CATV, videoconference and microwave links. The same switcher also serves as the outgoing link for the signals transmitted from within the building to the outside, and it routes all the signals flowing from the different corporate rooms in the building: the press conference room in the lobby, the auditorium in the first floor, and the conference rooms on the second and third floors. The switcher is controlled by Sierra G.R.I.P. software running on a dedicated computer connected directly to the backplane of the Lassen 3232VS. According to the users, “the graphic interface of the software makes it easy, practical and very reliable to operate and configure the switcher”.

The press conference room is equipped with a VS-5x4 switcher that routes the signals coming from the core control. A VP-724DS seamless switcher / scaler, feeds several input video / VGA signals to an LCD projector attached to the ceiling, and projects images on an automated power screen. The control room is equipped with a VM-80A to distribute audio signals locally to the PA console and from there to local loudspeakers. It also features a VM-1120, connected to a wall plate in the press conference room. This audio DA feeds the audio signals to the reporters’ recorders connected to the wall plate located on shelves at the back of the room.

The internal conference room is equipped similarly. Located on the second floor, it has several needs, among which is the distribution of a video signal to eight plasma display panels located in the centre bay and surrounding the 40 seat conference table. This distribution is accomplished with a VP-12xl. The video signal can be fed from several sources, and this is where a VS-848 comes into play. The images displayed can come from sources which are outside the premises (such as the links that feed into the core control room), from cameras or video devices located in the other rooms in the building or in the core control room, from videoconferencing equipment, or from lap-tops inside the room. The lap-top signals are routed via a VP-61xl VGA/XGA switcher along with their stereo audio signal, into the control room for processing and routing either to the local display devices or to the rest of the facility’s rooms. In this room, there is also a VP-724DS to convert video formats into VGA/XGA signal, displayed on the monitors.

The auditorium is used for conferences of the party’s senate members and accommodates comfortably up to 60 people. There are several displays (both PDP and LCD), along with a central LCD projector, which are all connected and fed by signals coming from another VP-724DS, connected to a VS-5x4 that links the video signals to and from the core control room in the basement. The audio for the auditorium loudspeaker system is provided by a VM-80A. The video signal in VGA format is fed to the screens and the projector via a VP-12xl and the lap-top''s signals to the seamless switcher are selected through a VP-32xl.