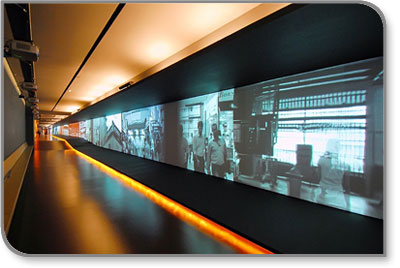 The unique Portuguese museum is the first language museum in the world, located in an old train station in San Paulo, Brazil. An impressive & innovative Audio Visual system was installed inside the museum, also unique in the world. Using 36 projectors in series, it creates a 106 meters long by 2.5 meters high computer image on one screen. This is the world''s longest multi-projector image. Controlled by a server, special software splits the long image into 36 pieces, with overlapping between the images.
In order to send the 36 XGA resolution images from the server to the projectors, each of them with a different cable length, Mr. Peter Lindquist, the designer and owner of KJPL ARbyte, which installed the system, used 36 pairs of Kramer PT-110 & PT-120 XGA over CAT-5 Transmitters and Receivers.
“First of all”, says Peter, “We had two problems: cost of cables, we were looking for a more economical solution, and the long distance to part of the projectors, the longest cable is about 120 meters. First we looked to the KVM solution but it was too expensive. Later I went to the InfoComm 2005 show in the USA, looking for a good solution with reasonable cost. The only company that showed a functioning XGA over CAT-5 system was Kramer Electronics. Other companies just showed unconnected boxes, not an operating system. Later I got a demo pair of their XGA over CAT-5 transmitters and receivers, tested and approved it, and later ordered and installed the 36 pairs, to my complete professional satisfaction”.
This Portuguese museum was inaugurated on March 21, 2006 in the presence of high level officials from both Portugal and Brazil, the largest Portuguese speaking country in the world. In the first 4 months, about 206,000 visited it. To learn more about this impressive museum, please go to: http://www.museudalinguaportuguesa.org.br/