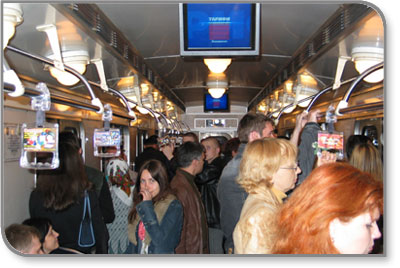 When the Kiev Underground Railway System wanted to update its 44-year-old passenger communication system, they turned to Kramer Electronics for a solution that would provide high-resolution video in every car and withstand the rigors of the Underground environment. With more than 1.5 million passengers daily, the Underground saw an opportunity for advertising and easier information dissemination, but they needed just the right product combinations to make it a reality.

“They needed a video network, primarily for advertisement purposes, but they also wanted to provide station information inside the train cars,” said Serge Dmitrenko, Chief of Kramer Electronics Technical Support team in Russia. “They intended to use hardware made locally in Kiev, but were unable to get the required signal quality underground. So, they began searching for a branded solution.” As the officials at the Underground searched for their ideal products, they established requirements that would ensure the highest quality signal for difficult-to-reproduce items like text and graphics. The requirements included computer XGA resolution at the same level and quality in every car, along with small product dimensions and performance stability for optimum use in the noisy environment of the subway which is filled with electrical interference. In addition, the Kiev Underground team wanted a quick production response and permanent technical support in the city speaking the native language.

“These features were not unique by themselves, but combined, they are a very rare find with a single manufacturer,” Dmitrenko noted. “We addressed their needs with a number of product trials and unique solutions. We also provided detailed attention to their market, with the project support they needed.” Kramer was selected to provide line amplifiers and high-resolution XGA distribution amplifiers for the project. The result: more than 2,000 Kramer machines run on the Underground Railway. The Product Network The Underground installed 15-inch LCD PC monitors in each of the five cars of 110 trains, plus 20 spare cars, for a total of 570 cars with monitor access. The Underground provides source material that includes text on the monitors with station names and transition station information, as well as alarm messages. It also showcases advertisement blocks throughout the day and beautiful, calm pictures during remaining times. The VP-300N high-resolution distribution amplifiers were selected for their video bandwidth, which exceeds 400 MHz, ensuring that the machines remain transparent even at high-resolution graphics modes such as UXGA. The amplifiers accept one input, provide correct buffering and isolation, then distribute the signal to the two or three monitors in the train cars.

They are ideal for this multi-monitor application, and each car on all of the Underground trains has three VP-300N DAs, distributing signals to the five or 6 monitors in each car. The amplifiers are housed in additional monitor cases within the trains to protect them. The VP-200xl Line Amplifier/Distribution Amplifier was also selected for its ability to handle remote monitor applications. The unit accepts one input, provides correct buffering and isolation, and distributes the signal to two identical outputs. It has a video bandwidth over 405 MHz, and remains transparent even at the highest resolution UXGA modes. Each car on the train houses one VP-200xl in protective/decorative covers under the roof of the train car. Kramer also provided numerous 5-coax shielded cables and 15-pin HD-15 connectors for the XGA signal distribution.

All of the power supplies were changed out to those used specifically for underground trains. Not only did Kramer meet the stringent and unusual requirements of the Underground project, but the products also stood up to the dust, dirt, and vibration presented by the Underground environment. According to Dmitrenko, no changes were needed on the products themselves. “Kramer made no special adjustments to the products to be used on the Metro. Because of our excellent quality and attention to detail, the product already met all of the specifications,” he said. Kramer’s tight manufacturing quality control ensured the quality of every machine, every time.

Regular Kramer features like sturdy and reliable construction made Kramer products stand out in the product review. Kramer’s ability to provide very detailed mechanical information on its products to support the integration of the project and to supply cables for use with the XGA signals that have excellent shielding from Interference also made Kramer a natural fit. The outcome of the project, which was completed by the Moscow Kramer team over a six-month period, not only includes the 2,000 amplifiers, but also 33,000 meters or 25.5 miles of cable (300 meters or 984 feet per train), 9,900 connectors (90 per train) and a high quality XGA signal that is the same on every one of the 3,200 monitors.