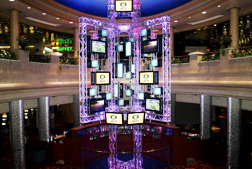 Hampton, New Jersey– February 14, 2006 – Celebrating their 25th Anniversary in 2006, Kramer Electronics, an ISO 9001 : 2000 certified company, and a worldwide supplier of audio, video and computer graphics signal distribution, switching and processing equipment and Sierra Video Systems, a Kramer Electronics Company, are pleased to announce the use of their products in the newly redesigned Casino Niagara in Niagara Falls, Ontario, Canada.

Casino Niagara recently embarked upon a “re−invention” in a saturated Canadian casino market because they wanted to attract a young, mainstream audience. Their goal was to not only capitalize on the popularity of sports betting, televised poker and off−track betting, but also to increase their table and slot machine business. At the center of this stunning new facility are Kramer Electronics and Sierra Video Systems products. From the three−story media tree to the sports lounge plasmas, Kramer twisted pair transmitters and receivers and Sierra Video Systems routing switchers flawlessly move video signals to over 100 displays throughout the building. While sporting events are broadcast in the lounge, graphics and promotional information are displayed on the media tree, and live performances from the third floor stage are broadcast throughout the building.

When the project began, the Casino Niagara folks enlisted the help of Toronto architecture firm Reich & Petch to do a total overhaul of the building. Designing a concept of high−impact architectural features in an entertainment environment, Reich & Petch looked to Westbury National, a local professional audio/video/lighting installation firm, to make it a reality. Westbury National in turn worked with White Radio, the exclusive Canadian Distributor for Kramer Electronics and Sierra Video products, to assist Westbury National with the necessary Kramer and Sierra Video products to accomplish this goal.
“Reich & Petch wanted to replace the building’s dated architectural waterfall with a huge three−story media tree right in the middle of the escalator atrium,” said Brock McGinnis, sales manager at Westbury National. “Our job was to incorporate that structural concept with Casino Niagara’s marketing and visual entertainment requirements.”

The media tree includes over 150 plasma and LCD displays, 80 LED lights to make the media tree change colors, rear projection video walls, an advanced sound system, and a network of routing switchers, converters and receivers to transmit the high−quality video content. The media tree installation was not without challenges. The three−story media tree in the atrium had to be built from the bottom up. When the first level was built, the installation teams climbed onto it to create the next level, building intermediate structures to hold the workers. Additionally, space and design constraints prohibited the use of high quality but bulky 5−wire RGB cables. Single wire CAT 5 network cabling was used to connect to Kramer TP−200 receivers, which could service two pairs of monitors on the tree with a single wire. The TP−200 receivers were mounted between pairs of video monitors and connected to Kramer TP−100 transmitters in the rack room, 500−600 feet away.
“We were able to get excellent response and clear picture even at that distance,” McGinnis commented. “The Kramer TP−100 and TP−200 transmitters and receivers were absolutely the best solution available for the application, regardless of the cost – but the feature/value package was also right.”

Sierra Video Systems’ matrix switchers fit the bill for the installation because of features like built−in redundant power supplies, full bandwidth on all channels, and two separate s−Video and composite video jacks.

According to Mike Webb, audio/video manager for Casino Niagara, the new entertainment theme has successfully increased business, and the equipment design has helped his team to run the show flawlessly. His full−time crew controls the constantly changing content on all of the displays, as well as the audio levels on the floor, the sports betting content and the cameras that videotape the live performances.

Casino Niagara is continuing to build its system, with 12 new display installations throughout the property, taking the clientele even closer to Las Vegas than they imagined.