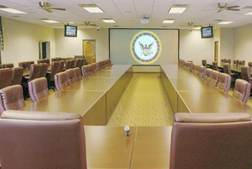 After Hurricane Ivan destroyed much of Florida’s Pensacola Naval Air Station (NAS) in 2004, this Navy base began its quest to rebuild its Wings of Gold. Two years later, one of its finished products is a conference facility that features high-speed audio/video communications with improved quality and signal routing, a user-friendly interface, and a remarkable feeling of high technology. At the controls: Kramer Electronics and Sierra Video Systems products. Providing the necessary mix of quality, versatility and value, the Kramer and Sierra Video products are the heart of the Pensacola NAS conference facilities network. While Pensacola NAS serves as the launching pad for the flight training of every Naval Aviator, graduating more than 30,000 students each year, it also has 15,000 employees requiring meeting space for everything from training to classified briefings. The new conference facility is used by military personnel, civilians, Department of Defense officials and various Federal Government employees. Pensacola NAS communication specialist Gabriel Walker was charged with replacing the weather-damaged rooms. His ideal system included scalers and switchers in every room that would provide enough features and inputs to handle digital video signals and at least three different video sources. Working with Professional Communications Systems (PCS), a Florida-based professional audio/video designer/integrator, Pensacola NAS rebuilt a seamless system that features the Kramer VP-724DS ProScale™ scaler/switcher in each of the 11 conference rooms. The machines offer both multi-standard video to RGBHV scaling and multiple-input switching capabilities. The system also includes 28 VP-200NA distribution amplifiers for computer graphics video signals and stereo audio signals throughout the building. The Sierra Video Systems 3232V5S RGBHV 32 x 32 Matrix Switcher links all the rooms together in the central control room, enabling signals from DVD and VHS players, computers, laptops, cameras and satellite video to be distributed back to the conference rooms. Signals can be routed between rooms and each room offers videoconferencing capability. PCS installed an AMX touch-screen control system in the central command center, a Symetrix audio system and Pelco video cameras, all interwoven through the Kramer Electronics and the Sierra Video Systems switchers and scaler/switchers. Hardy Morris, account representative at PCS, noted that the Kramer scaler/switchers met the government’s technical requirements, provided a high-quality image and allowed a smaller, yet expandable, matrix switcher in the application. The scaler/switchers in each room digitally reprocess the signals and regenerate the video at a higher line and pixel rate format, providing native resolution video for LCD, DLP and plasma displays. They also act as glitch-free switchers for easy component switching. In addition, thanks to the scaler’s seven inputs, classified briefings are possible in each room by maintaining a dedicated line for classified information. “Moving signals from room-to-room quickly is important in this application, and the scalers allow rapid signals at high quality,” Morris said. “They also eliminate the blue screen when switching sources.” After working for nearly two years to accommodate funding and construction schedules, Morris says the final product has met all of their goals. The “hub and spoke” configuration allows for expansion possibilities, and the system has proven to be top-quality and dependable. “The Kramer seven-year warranty was also important because it eliminated any issues resulting from construction delays – the customer still had the complete warranty on the product,” said Morris. With Kramer Electronics and Sierra Video Systems technology aboard its conference facility, Pensacola NAS will continue to soar as the premiere flight center for Naval Aviation.