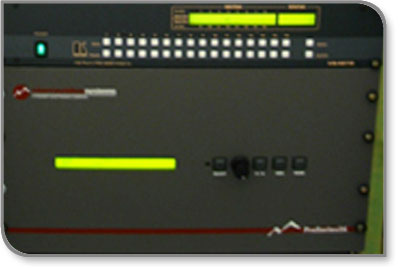 On September 2004 Kramer Russia installed a switching system in a non-linear editing studio of a Russian serial production company in order to optimize its use of video cassette recorders and players, already using two different formats (DVCAM, Betacam) and preparing to use a third one. The preliminary design (in the drawing below) shows that all the VCRs are installed in one location, and their inputs and outputs may be switched from any editing console using matrix switchers. The system requirements stated that it should, first, be able to serve up to eight non-linear editing facilities and up to eight video cassette recorders or players. Second, that the system should be able to switch video and audio inputs and outputs from any VCR to any non-linear editing console for digitization and backward tape recording of the edited footage. Third, that the RS-422 control connections should be provided as well. And, finally, it was necessary to provide the possibility for all operators to choose a VCR to work with directly from his/her working place, and that no other operator would be able to break this connection. All the executing equipment is enclosed in one space, which gives the following advantages: 1. Noise level in editing facilities is sufficiently reduced since there are no noise producing devices (fans, hard disk drives etc.) at the operators’ workplaces. 2. The provision of high quality backed-up power to all the system''s components is easy and inexpensive. 3. There are practically no signal losses in very short audio and video paths. The switching block (drawing below) which links all the components to each other is the heart of the system. Inputs and outputs from the VCRs and non-linear editing consoles are switched with Sierra Video PRO 1616V3 (YUV video) and Kramer VS-1616A (Balanced Audio) matrix switchers. The RS-422 interfaces of all the components are connected to the Kramer VS-4216 matrix switcher. For convenience all the viewable outputs of the VCRs (Composite Video + Audio) are coupled with monitors on the operators’ desks through Kramer VS-848 matrix switchers. The core of the switching block is the control sub-system (drawing below). The four matrix switchers are connected to the Central Programmable Controller using RS-232 interface, and the Kramer VS-8000 control panels on the operators’ desks are connected to the same controller through RS-485 links. All the system''s control logic is embedded in the Central Controller, which makes it possible to create this system in the form presented here. Kramer VS-8000 is a Master Remote Control Unit, designed for broadcast and industrial studio applications. It allows access and control of all Kramer “88”-series matrix switchers (the VS-88A, VS-88V, SD-7588A, SD-7588V and VS-4228). Using the built-in RS-485 interface, the RC-8000 allows the creation of any configuration consisting of one PC, an unlimited number of remote controllers, and up to eight “88”-series matrix switchers. One VS-8000 can activate all the functions of the connected devices, individually or grouped. In this case the VS-8000 controls not only the limited number of the above mentioned models, but the whole system, because instructions coming from the panels are processed by the controller and interpreted as required for this system. At the final stage of the project implementation the designers felt the necessity of adding a device for real-time conversion from one color coding system to another (e.g. from PAL to NTSC). For this purpose the Kramer SP-11D video processor was chosen. This is a broadcast-quality video multiformat processor with unique, powerful features. It can accept video in composite, Y/C, component (YUV or RGB/S) or SDI, and outputs all formats simultaneously, converting them in PAL, SECAM or NTSC system if necessary. ProcAmp features include contrast, brightness, sharpness and a full range of color control features – in both YUV and RGB color spaces. Prepared by Kramer Russia Representative Office