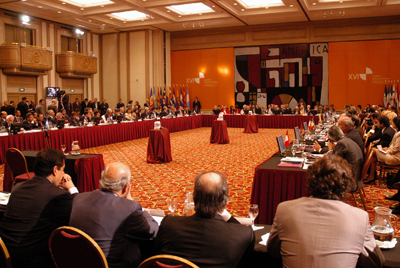 Presidents of 21 Latin American countries, joined by the King of Spain, the prime ministers of Spain and Portugal, and Mr. Kofi Anan, the United Nations Secretary General communicated using Kramer products at The Iberoamericana Summit Meeting on November 2006 in the Radisson Hotel, Montevideo, Uruguay.

The sophisticated AV distribution system was installed by the Uruguayan company CINUR, a private company established 50 years ago, with 14 years experience in the Multimedia and AudioVisual field. www.cinur.net “The most important product was the VP-725DS Scaler / Seamless switcher", says Gustavo Luis, one of the partners, "that scaled the video signals to XGA resolution, which, driven through 45 meters of Kramer Cable, were then distributed by a VP-6XL to 6 units of VP-400N and eventually outputted to 23 monitors."

"This was our largest event with respect to the number of monitors." He adds. "We started the design a few weeks before the summit, and even made a demonstration to the organizers to prove that all 23 monitors show exactly the same image.” When the summit was closed, the organizers invited the co partners of CINUR, Leonardo Gaidos and Gustavo Luis, to the closing cocktail to celebrate the success of the AV system. In December 2006, CINUR installed a similar AV distribution system at the inauguration of The Pasteur Institute in Montevideo, the first one outside France. In this event, CINUR used the Kramer VP-727 scaler with a variety of inputs, using all its impressive seamless transition effects. “Since we started using Kramer scalers and long XGA cables, our capability of high level Installations has been significantly improved; we can scale signals and distribute them to longer ranges and with superior image quality” concludes Gustavo Luis.