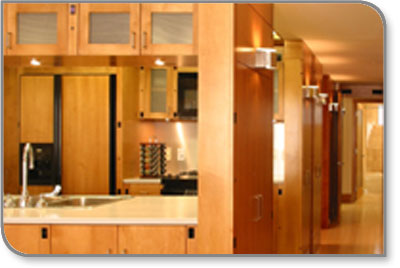 In an apartment in Cambridge, MA, sensors are located on many of the objects that people touch and use, including cabinet doors, furniture, windows and kitchen containers. Residents carry Pocket PC devices that use sensors to trigger and acquire information such as heart rate, physical movement, posture or motion. This “wired” home is inhabited by volunteers who are being studied by researchers, who receive the audio, video and still image data through the technology of Kramer switchers and distribution amplifiers. The Kramer 32 x 32 matrix switcher (3232VS), along with the 20 Kramer VM-30AVB distribution amplifiers route video from cameras and microphones to 20 computers at the research hub. Data on the health, well-being, learning, communication and care of our nation’s elderly is collected and reviewed at the 1,000-square-foot facility, called the PlaceLab.

The PlaceLab is a joint initiative of the MIT House_n consortium and TIAX LLC. Devised, in part, to explore architecture coupled with home systems for baby boomers now advancing in age, a goal is to create an environment that would encourage older people to live in their own homes as long as possible before moving to assisted living or nursing homes. “The apartment is an exciting facility designed to combine the capabilities of a highly instrumented research lab with the natural environment of the home,” said Dr. Stephen Intille, House_n Technology Director. “We believe that PlaceLab creates research opportunities that are not available in any other facility in the world.”

The various technologies incorporated into the PlaceLab allow researchers to study nearly every aspect of life in the home. The Kramer equipment helps acquire and store the data, with connections to various computers within the facility. Computer vision processing software on each computer analyzes each video stream, and an algorithm selects the best four views to save in real-time. The Kramer matrix switcher is controlled by one of the computers and then sends the four video views to the AV input of the computer saving the video. It also redirects audio output from each of the 20 computers to any one of the speaker outputs in the apartment.

“We are delighted that our equipment is an integral part of this high-tech laboratory,” said Clint Hoffman, vice president Kramer Marketing. “The Kramer equipment met the complex needs of the research facility by enabling detailed control and switching ability along with computer connections. In addition, Kramer’s academic discount provided a valuable price point for top-of-the-line technology.” Among the initial areas of research at PlaceLab are proactive health care, just-in-time information and daily living patterns, which can be early indicators of emerging health problems in the elderly. Researchers are also studying biometric monitoring, indoor air quality, and privacy and trust issues. Other research projects will also be available through PlaceLab in the future.