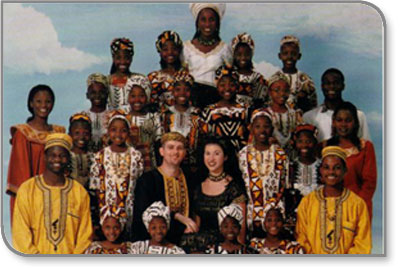 In their tours around the world the Watoto Children’s Choir uses the Kramer Electronics VP-719DS ProScale™ Digital Scaler/Switcher to switch between video and PC images. In 1983, Gary and Marilyn Skinner, Canadian missionaries, established an English-speaking church in the heart of Kampala, Uganda, where approximately 2 million children have been orphaned by the civil war and the AIDS. In 1992, the Skinners started Watoto Child Care Ministries to address the Ugandan orphan crisis. “Watoto” (pronounced: wah-toe-toe) means “children” in Swahili. Funding for Watoto Child Care Ministries is raised exclusively by the Watoto Children’s Choir.

Since 1994 Watoto Choirs have toured internationally, accompanied by a team of adults. Together they present Watoto’s vision and mission through their music and dance, which is an energetic fusion of contemporary gospel and traditional African rhythm. Watoto Children’s Choir has had two unique opportunities to perform for the President of the United States and various members of his cabinet. On June 10, 2003 Watoto was invited to perform at a ceremony in the Rose Garden at The White House in Washington D.C.

The choir also sang for the President and First Lady at their request on July 11, 2003 at an AIDS event in Entebbe, Uganda as part of Bush’s five nation tour of Africa. As a result the choir was in the spotlight of the international media appearing on CNN, the BBC, ABC Nightly News with Peter Jennings, and on the cover of The New York Times, International Herald Tribune, The Washington Post, and the African edition of TIME magazine among many others.