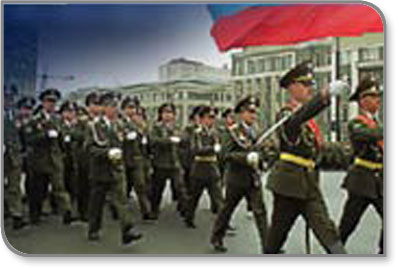 On May 9, 2005 a Military Parade of World War II veterans and Russia’s Armed Forces, commemorating the 60th anniversary of the Great Victory over Nazi Germany, has been conducted in the Red Square in Moscow. The parade was watched by more than 50 world leaders, among whom The American President Mr. George W. Bush and The German Chancellor Gerhard Schroeder. A huge monitor was installed to display a documentary film of the 1945 Victory Parade. The monitor was operated by the Big Screen Service company with the use of Kramer Electronics'' VS-1616V, 16:16 Composite Video Matrix Switcher, and VP-725DS – Multi-Standard Scaler, converting video to computer graphics. The component video signals (YPbPr) from the VCR and video server were routed into a video mixer and then into two Kramer VP-725 scalers (one for the VCR, the other for the server). The scalers converted component video into DVI format, and the digital signals with the required resolutions were routed to the main screen. For backup purposes, an additional VCR and server were provided, linked through the Kramer VS-1616 matrix to allow fast connection to the mixers.