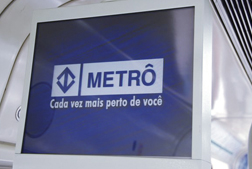 This impressive large scale digital signage project was conceived in September 2004, with the objective of installing a Signage System in all Sào Paulo Metro Cars that would provide real time information to passengers as well as delivering advertisements. This important information is now available and visible to more than 3 million people who use the metro daily.

The goal of the Sào Paulo Metro digital signage project is to install these systems in all of their 109 trains. Each of the trains has six cars, for an impressive total of 654 total cars to be outfitted with these digital signage systems.

As of today there are already 32 trains that have fully installed systems up and running. These trains run 19 hours a day, but the electricity is never turned off. This means that these digital signage systems and the Kramer equipment that drives them runs 24 hours a Day, 7 days a week, 365 days a year. And, these Kramer products do all this inside a compartment on the train cars where the average operating temperature is 60°C (140°F).

“In the project prototype we started by trying to send the XGA signals through the train, using typical shielded XGA cables. By doing that we had too much noise on the image and we lost the sync toward the end which resulted in no image on the last two cars” stated Benedito Ribeiro, Technical Director of the TV MINUTO, the company which won the Metro bid by showing a functioning prototype using the Kramer products.

Each of the trains has four CHOPER engines per car for a total of 24 engines per train which operate at 750 Volts DC and create a huge amount of electromagnetic induction noise. Kramer products provided the solution which changed the whole project concept. TV MINUTO used the state-of-the-art Kramer equipment for transmission of XGA signals over twisted pair cables. With the TP-100 and TP-200 twisted pair transmitter and receiver and the VP-200N and VP-400N distribution amplifiers, the problem was solved.

“During the first year of operation of the system, we have not even had one problem and we have never had to replace a single Kramer machine” stated Ribeiro. “Nobody here believes it but we have had zero problems with the Kramer equipment! We (the Metro people) are very proud of this project.” “On behalf of the Sào Paulo Metro, which is among the best Metros in the world, we strongly recommend Kramer equipment for any similar train project or any digital signage project for that matter, as it has proven to be the best there is. We have the system here in Sào Paulo to prove it.