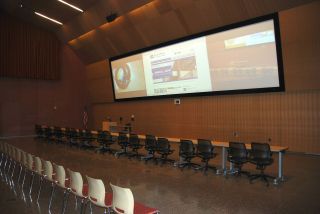 When GateWay Community College (GWC) in Phoenix, AZ, decided to build a new Integrated Education Building (IEB) and remodel its Maricopa Skill Center (MSC) campus, one of the goals was to incorporate state−of−the−art audio/visual and IT classrooms that would allow students and faculty access to digital A/V and HDCP content in a simple−to−use configuration. They hoped to create an intuitive model that was identical in all of the rooms, to reduce the need for frequent troubleshooting by technical support staff.  The college has an approximate attendance of 13,000 students and is part of the largest community college district in the United States − Maricopa Community College District.

According to Senadz Lubovac, coordinator of audio visual information technology at GateWay Community College, the team wanted the capability of using both digital and analog devices in the classrooms, and they hoped to reduce the size and cost of lectern−to−projector cabling.  “After comparing the features, complexity and pricing of a variety of products, we decided to use Kramer as a core infrastructure in designing our standardized classroom, because it met our needs to handle both HDMI and HDCP,” Lubovac said.  “In addition, Kramer’s pricing really made a difference.”

The GateWay A/V team selected a slim lectern that houses a built−in PC and document camera and has a flip top for a laptop computer.  It also contains the core of the classroom system, the Kramer VP−729 ProScale® digital scaler/switcher and Kramer TP−573 and TP−574 DGKat™ twisted pair transmitters/receivers for HDMI, bidirectional RS−232 and IR signals.  Each room features AMX control, motorized screens, LCD projectors, microphones, audio amplifiers and IP cameras.  The lecterns offer front plates for additional student connections to the system.

The conference rooms use the VP−729 at the heart, then add videoconferencing equipment and a 60− or 70−inch display.  The multipurpose rooms follow the same configuration, and also include a Kramer VS−66HDCPxl 6x6 DVI Matrix switcher, TP−581T/582R HDBaseT twisted pair transmitters/receivers and FC−46xl audio de−embedders.

“This design with the VP−729 scaler/switcher as the backbone enables us to display any analog or digital AV device on the screens, with an easy interface control,” Lubovac noted.  “The goal was to design for the end user and get all the rooms to operate exactly the same way.”

The VP−729 scaler/switcher also allows the broadcast of emergency messages in classrooms, a key communications tool that can reach students in all Kramer−equipped classrooms each day.