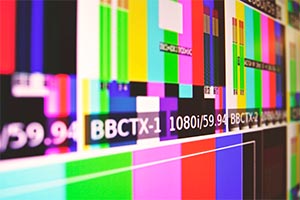 How Many K's Do You Need

In baseball, the letter ‘K’ is shorthand for strikeout – getting a batter to swing at or take a third strike. It’s not unusual to see fans of a particular batter holding up signs with large letter ‘Ks” on them to signify how many strikeouts a pitcher compiles during a game. By the way, the record for a nine−inning game is 20 strikeouts, an almost−impossible feat accomplished by just two major league pitchers. Who were they− (Answer at the end of this article)

In the world of electronics, “K” stands for the more conventional value of one thousand, being derived from the “K” in “Kilo,” which according to the dictionary is “…a Greek combining form meaning “thousand,” introduced from French in the nomenclature of the metric system” and “…French, representing Greek chī́lioi or a thousand.”

The display industry has become fixated on “Ks” lately. Until the late 1990s, we didn’t have any displays capable of “kilo” pixels of resolution: Just 20 years ago, the first plasma display monitors came to market with 1,280 horizontal imaging pixels, making them the first “kilo” displays (at least, in one axis.) After the turn of the 21st century, we started to see displays panels with almost 2,000 horizontal pixels (1920, to be exact) and for the first time, more than 1,000 vertical pixels (1080 and 1200, respectively).

Wow, that was a lot of pixels – 2,073,000 to be precise. And most of us figured that would be good for some time to come – who would need more resolution than that−

Turns out, everyone. Aside from some unusual high−resolution displays from Apple that had 2550 horizontal pixels, we were stuck at 1920x1080 and 1920x1200 for a few years. That is, until 2012, when a new crop of so−called “4K” displays made an appearance at the IFA consumer electronics show. (To be fair, Sony had been selling high−brightness SXRD projectors for cinema applications since the mid−2000s and these models had 4096 horizontal pixels.)

Six years later, televisions and monitors with 4K resolution (mostly 3840 horizontal and 2160 vertical pixels) have become commodities. What happened− For starters, Chinese display manufacturers made big bets on 4K LCD panels for TVs, figuring that Full HD (1920x1080) would provide diminishing returns over time. They constructed new fabrication lines to crank tens and hundreds of thousands of panels each month.

Korean manufacturers didn’t sit on their hands, ramping up production of 4K LCD and organic light−emitting diode (OLED) panels for televisions and commercial applications. “4K” became a buzzword for the latest and greatest in flatscreen displays. Screen sizes increased as prices continued to drop from $238 per diagonal inch for those original, limited function 84−inch 4K LCD monitors to an amazing $9 per diagonal inch for a 55−inch 4K television today.

While that’s a bargain price for consumers, there’s little or no profit for panel and display manufacturers when a 60−inch 4K TV can be had for less than $1,000. So, the Chinese took the lead again, deciding maybe it was time to jump to the “next” K – 8K, or more specifically, 7680 horizontal and 4320 vertical pixels. (For those keeping score at home, that represents about 33 million total pixels, or 16 times the resolution of an old−fashioned Full HDTV.)

What – has the world gone crazy− Aside from some Ultra HD Blu−ray discs and Netflix/Amazon streaming, there’s very little 4K content to watch today. And you want me to buy an 8K TV next time around−

Remember – it’s not about content, it’s about profitability. And it’s also about televisions and monitors getting larger and larger. 8K resolution on a 42−inch display that sits ten feet from the nearest viewer makes no sense at all. But 8K resolution on an 80−inch display that sits just a few feet away does make sense. Think of how coarse outdoor LED signs appeared in the early 2000s. Now, wander through InfoComm and notice the 20−foot and 30−foot fine−pitch LED displays that are popping up everywhere: With a fine dot pitch (say, 1.2mm and down), they’re approaching 8K resolution.

Market research done by a few companies predicts that by 2020, over 5 million 8K TVs will be produced and sold worldwide by 2020 – less than a year and a half from now. Granted, many of those sales will take place in China, but you will see 8K televisions on store shelves by Christmas of this year and certainly no later than the 2019 Super Bowl.

Think we’re crazy− At the recent IFA Show, both LG and Samsung announced they were bringing 80 inch−class 8K televisions to retail this fall. LG’s entry, which has no model number or pricing information yet, is an 88−inch OLED TV. (For those keeping score at home, that’s a little more than seven diagonal feet.) Samsung’s answer is the Q900FN QLED 8K TV, an 85−inch LCD display that uses quantum dot backlighting to produce high dynamic range images and is supposed to arrive on these shores in October. There’s no way to predict retail prices for either product, but it’s a safe bet they’ll be more than $9 per diagonal inch.

If you still can’t get your head around the fact that 8K TV is right around the corner, this will blow you away; Innolux, a Taiwanese display manufacturer, showed a 16K 100−inch monitor at a trade show in China in late August. Yep, you read that right – 16K, or more specifically, 15,360 horizontal x 8,640 vertical pixels. If you can’t see the pixel structure on an 8K display unless you are just 1.5 feet away, you’ll never spot it on this display without a jeweler’s loupe.

Crazy, right− So, what does this mean for signal management and interfacing products− With Full HD, we have to move 2,073,000 pixels every second. For 4K (Ultra HD), the payload jumps to 9.9 million pixels per second, and for 8K, we’re looking at 39.6 million pixels per second (including the blanking interval). Our 594 MHz pixel clock for 4K now accelerates to about 2.4 GHz and a data rate of about 22 gigabits per second (Gb/s) now rockets to about 90 Gb/s for a 10−bit RGB 8K signal. Got bandwidth− We sure hope so….