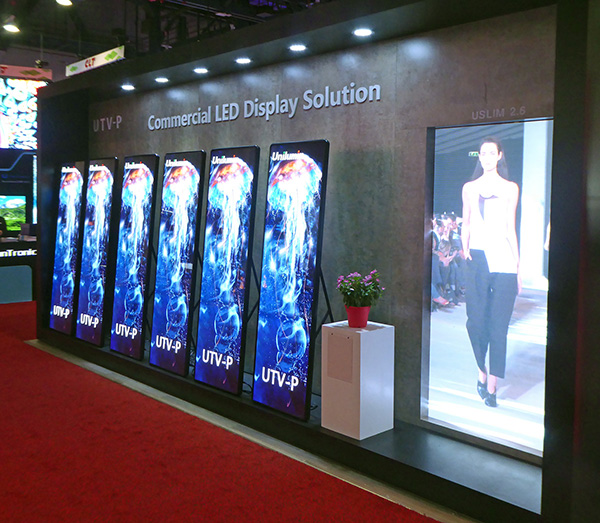 If you managed to make it out to this year’s running of InfoComm, you might have summarized your trip to colleagues with these talking points:

(a) LED displays, and

Indeed; it was impossible to escape these two trends. LED walls and cubes were everywhere in the Las Vegas Convention Center, in many cases promoted by a phalanx of Chinese brands you’ve likely never heard of. But make no mistake about it – LEDs are the future of displays, whether they are used for massive outdoor signage or compact indoor arrays.

With the development of micro LED technology, we’re going to see an expansion of LEDs into televisions, monitors, and even that smart watch on your wrist. (Yes, Apple is working on micro LEDs for personal electronics.)

Projector manufacturers are understandably nervous about the inroads LEDs are making into large venues. Indeed; this author recently saw Paul Simon’s “farewell tour” performance at the Wells Fargo Center in Philadelphia, and the backdrop was an enormous widescreen LED wall that provided crystal−clear image magnification (very handy when concertgoers around you are up and dancing, blocking your view of the stage).

As for the other talking point – well, it was impossible to avoid in conversations at InfoComm. Between manufacturers hawking their “ideal” solutions for compressing and streaming audio and video and all of the seminars in classrooms and booths, you’d think that AV−over−IT is a done deal.

The truth is a little different. Not all installations are looking to route signals through a 10 Gb/s Cisco switch. In fact, a brand−spanking−new studio built for ESPN in lower Manhattan, overlooking the East River and the Brooklyn Bridge, relies on almost 500 circuits of 3G SDI video through an enormous router. Any network−centric signal distribution within this space is mostly for IT traffic.

That’s not to say that installers are poo−pooing AV−over−IT and the new SMPTE 2110 standards for network distribution of deterministic video. It’s still early in the game and sometimes tried−and−tested signal distribution methods like SDI are perfectly acceptable, especially in the case of this particular facility with its 1080p/60 backbone.

Even so, the writing on the all couldn’t be more distinct with respect to LEDs and network distribution of AV. But there were other concerns at the show that didn’t receive nearly as much media attention.

At the IMCCA Emerging Trends session on Tuesday, several presentations focused on interfacing humans and technology. With “OK Google” and Alexa all the rage, discussions focused on how fast these consumer interfaces would migrate to AV control systems. An important point was made about the need for two−factor authentication – simple voice control might not be adequately secure for say, a boardroom in a large financial institution.

What would the second factor be− Facial recognition− (This was a popular suggestion.) Fingerprints− Retinal scans− A numeric code that could be spoken or entered on a keypad− The name of your favorite pet− Given that hackers in England recently gained access to a casino’s customer database via an Internet−connected thermometer in a fish tank, two−factor authentication for AV control systems doesn’t seem like a bad idea.

Another topic of discussion was 8K video. With a majority of display manufacturers showing 4K LCD (and in some cases OLED) monitors in Vegas, the logical question was: Could resolutions be pushed higher− Of course, the answer is a resounding “yes!”

Display analysts predict there will be over 5 million 8K televisions shipped by 2022 and we’re bound to see commercial monitors adapted from those products. But 8K doesn’t have to be achieved in a single, stand−alone display: With the advent of smaller 4K monitors (some as small as 43 inches), it is a simple matter to tile a 2x2 array to achieve 7680x4320 pixels. And there doesn’t appear to be a shortage of customers for such a display, especially in the command and control and process control verticals.

The other conversations of interest revolved around the need for faster wireless. We now have 802.1ac channel bonding, with 802.11ax on the horizon. For in−room super−speed WiFi, 802.11ad provides six channels at 60 GHz, each 2 GHz wide or 100x the bandwidth of individual channels at 2.4 and 5 GHz.

But wise voices counsel to pay attention to 5G mobile networks, which promise download speeds of 1 Gb/s. While not appropriate for in−room AV connectivity, 5G delivery of streaming video assets to classrooms and meetings is inevitable. Some purveyors of wireless connectivity services like AT&T and Verizon insist that 5G could eventually make WiFi obsolete. (That’s a bit of a stretch, but this author understands the motivation for making such a claim.)

The point of this missive− Simply that our industry is headed for some mind−boggling changes in the next decade. Networked AV, LEDs, 8K video and displays, multi−factor authentication for control systems, and super−fast wireless connections are all in the wings.

And if you were observant at InfoComm, you know it’s coming…and quickly.