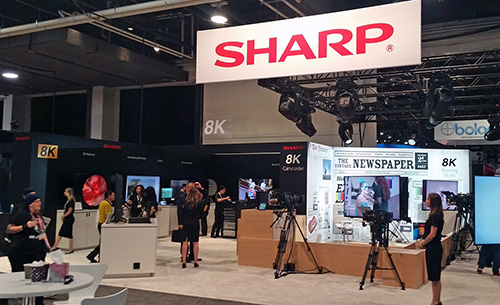 We just returned from our annual visit to the NAB Show in Las Vegas with a lot to think about – not the least of which was, where do we go from here−

From “here,” we mean conventional AV signal management and distribution, using industry standard formats like HD SDI, DVI, and HDMI. “There” isn’t as clearly defined, but we’re pretty sure it will ultimately involve TCP and IP, fast switches, and optical and twisted−pair cable.

Even so, there was no shortage of vendors trying to convince booth visitors that AV−over−IT is the way to go, and right now! Some NAB exhibitors have staked their entire business model on it, with flashy exhibits featuring powerful codecs, cloud media storage and retrieval, high dynamic range (HDR) imaging, and production workflows (editing, color correction, and visual effects) all interconnected via an IT infrastructure.

And, of course, there is now a SMPTE standard for transporting professional media over managed AV networks (note the word “managed”), and that’s ST 2110. The pertinent documents that define the standards are (to date) SMPTE ST 2110−10/−20/−30 for addressing system concerns and uncompressed video and audio streams, and SMPTE ST 2110−21 for specifying traffic shaping and delivery timing of uncompressed video.

Others at NAB weren’t so sure about this rush to IT and extolled the virtues of next−generation SDI (6G, 12G, and even 24G). Their argument is that deterministic video doesn’t always travel well with the non−real−time traffic you find on networks. And the “pro” SDI crowd may have an argument, based on all of the 12G connectivity demos we saw. 3G video, to be more specific, runs at about 2.97 Gb/s, so a 12G connection would be good for 11.88 Gb/s – fast enough to transport an uncompressed 4K/60 video signal with 8−bit 4:2:2 color or 10−bit 4:2:0 color.

The challenge to date has been to manufacture suitable cables for the transport of 12G SDI signals that will meet signal−to−noise (S/N) specifications. Moving to optical fiber is one way around the problem, but it appears most of the demos we saw relied on coaxial connections. To drive a 4K display, some manufacturers rely on quad 3G inputs. Ditto on getting 4K footage out of a camera, although to be fair, there were some single−wire 4K camera connections exhibited.

In an earlier blog post, we talked about the quantum leap to 8K video and displays. Well, we were quite surprised – perhaps pleasantly – to see Sharp exhibiting at NAB, showing an entire acquisition, editing, production, storage, and display system for 8K video. (Yes, that Sharp, the same guys that make those huge LCD displays. And copiers. And kitchen appliances. Now owned by Hon Hai precision industries.)

Sharp’s 8K broadcast camera, more accurately the 8C−B60A, uses a single Super 35mm sensor with effective resolution of 7680x4320 pixels arrayed in a Bayer format. That’s 16 times the resolution of a Full HD camera, which means data rates that are 16x that of 3G SDI. In case you are math challenged, we’re talking in the range of 48 Gb/s of data for a 4320p/60 video signal with 8−bit 4:2:2 color, which requires four 12G connections.

Like they say at the dragstrip, “Now THAT’S fast!” It’s so fast in fact that you can’t even use an expensive 40 Gb/s network switch to port this signal over an IT network.  Indeed; light compression must come into play to get that number down to a manageable level. The TICO (Tiny Codec) is a good candidate – 4:1 TiCo compression would pack our 8K signal back down to 12 Gb/s. JPEG2000 4:1 would do the same thing, and both are low−latency codecs (and are similar to each other in how they work). For that matter, 4:1 compression would drop a 4K/60 signal down to 3G levels, making it a heckuva lot easier to switch.

The Blue River NT technology sweeping through the AV industry uses a codec that’s adapted from VESA’s Display Stream Compression (DSC) and is even gentler, packing things down a maximum of 2:1 to get a 4K/60 10−bit 4:4:4 video stream through a 10 Gb/s switch. We haven’t seen it used in conjunction with an 8K video source yet, but be advised that DSC can actually work up to 3:1 compression levels and still remain visually lossless with very low latency.

In the NHK booth, you could watch a demonstration of 8K/60 video traveling through a 10 Gb/s switch using so−called mezzanine compression based on the TiCo system. In this case, NHK was using 5:1 TiCo compression to slow down a 40 Gb/s 8K/60 video stream to 8 Gb/s. Even our 48 Gb/s example from earlier would make it under the bar at 9.6 Gb/s.

So, what does this all mean− First off, SDI isn’t quite dead yet, to paraphrase Monty Python. It may not be suitable for long distance transmission of 4K video, but it’s still workable for short runs from cameras to switchers and other studio gear, and longer runs using optical connections. (The SNR hurdle still has to be cleared for long coaxial cable runs.)

Second, it’s becoming clear that some degree of light compression is going to be a way of life with 4K and 8K production, especially when you factor in the additional bits for HDR and high−frame rate video (of which there was plenty on display in Vegas). You think 48 Gb/s is fast− Try moving 8K/120 video around: Both NHK and NTT were showing exactly that, with corresponding data rates of about 96 Gb/s. Definitely “funny car” territory.

Third, we’re still a long way from resolving the SDI vs. IP argument. Indeed; some recent studio projects we’re aware of have been built using both SDI and IP architectures to move data and video on separate paths. While offerings like cloud storage will require the network hookup, point−to−point 1080p video can still travel happily over SDI connections. (It should also be pointed out that, for all the ballyhoo about 4K, very little in the way of 4K video production is being undertaken at present.)

NAB 2018 reflected all of this thinking, and then some. It’s almost as if everyone else at the show was waiting for the other guy to take the first step. SDI, or IP− Or Both− Come on, doggone it, make up your mind…..